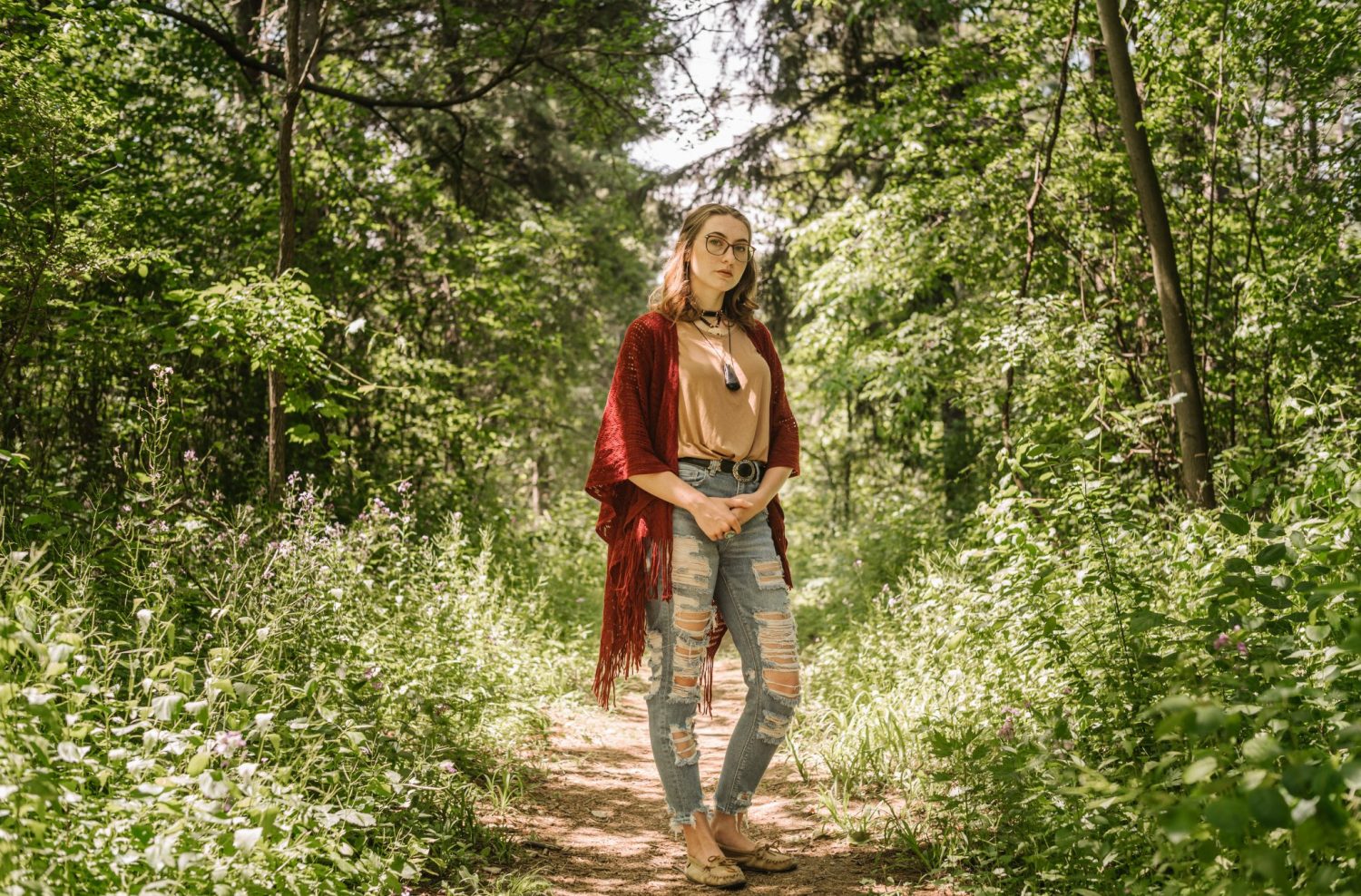 When maker Maddie Resmer — a fulltime student at the University of Waterloo in Indigenous Studies and Sexuality, Marriage and Family Studies — is not studying, working or running her business Little Wolf + The Willow you will find her helping others. A community activist at heart, she is passionate about social justice issues.

You may have heard her voice over the megaphone at rallies run by the Indigenous community, or seen her drumming at the beginning of the recent K-W Solidarity March for Black Lives Matter. Resmer’s community activism shows up in her commitment to environmental stewardship and the way she honours her heritage through wearable acts of resilience.

“No matter how tiny it might be, I really do feel that a person wearing that piece of art is an act of Indigenous resilience. It is saying we are still here, we are still creating, and we are still learning and teaching in the ways that our ancestors did. But we’re bringing it into the 21st century,” Resmer said.

When Resmer, who describes herself as a twenty-something, two-spirit mixed-Algonquin artist from the Algonquins of Pikwàkanagàn First Nation and the Kitigan Zibi Anishinaabe First Nation, started beading, she never planned to sell her art.

“I started beading first because I started connecting more with my Algonquin side. Creating regalia (what an Indigenous dancer wears during traditional dances like at a powwow) is a big part of your identity and becoming more connected with the culture. So I started beading my own pieces for my regalia, and then I started creating things for my family.”

Resmer describes beading as a sacred practice held by women in her Anishinaabe culture. “[Beading] is something that I always want to keep with me, because that is kind of like my starting point, my center point.”

She did not get serious about her beading until roughly last April when her father was diagnosed with stage four non-Hodgkin’s lymphoma. At that point, beading became a release and an act of healing.

“… it is a waiting game, and that is really frustrating. I felt like I had all this time where I was just staring at the walls and thinking, oh my god, I cannot keep doing this because I am going to drive myself crazy. I really just jumped headfirst into creating things.”

Originally, Resmer started as Little Bear Beading, but as she began to explore different mediums — she needed a more all-encompassing name, which is how Little Wolf + The Willow came to be.

Resmer explained the personal significance of choosing the wolf and the willow to represent her work — the wolf is one of her totem animals, and the willow is a plant that’s known for its healing properties. The willow is also strong under pressure.. Both of these are symbols of strength and adaptability she can rely on during times of adversity or stress.

Other elements that Resmer works with include leather, brass, clay and crystals. Like beads, these elements also hold meaning for Resmer. She started off using crystals during a visit to where she grew up in Golden Lake Ontario.

“There is a lot of really great stone medicine that comes from the lake itself and nearby creeks and so I was able to just go out on my own and find these naturally forming crystals and stones and work with them.”

Environmental stewardship is another important cause to Resmer, and with Little Wolf +The Willow, she participates in the practice of seven-generation sustainability — a practice that many Indigenous communities follow, that requires you to leave the earth better for the next seven generations.

Resmer puts this into practice by using up-cycled and vintage leather or thrifted items in her jewelry. Her father also provides her with animal hides and feathers ensuring no part of the spirit of the animal goes to waste. Even her business cards are made from recycled and uncoated paper.

What started as a way for Resmer to connect to her heritage, has evolved into a way to honour the past while living in the present.

Resmer says she can’t help but think about how pleased her ancestors would be when she’s wrapping up a piece someone has purchased, “to have…this medium that is still being used and… still being used in the ways that they did, and now…being sold on a laptop in an apartment in downtown Kitchener.”

“As an Indigenous-owned business, there’s nothing more important than celebrating our history, our sovereignty and our culture’s beauty in every way we can,” according to her Facebook post.

For more art in KW, a first-ever week-long, virtual art market supporting Black and Indigenous artists in our local community will take place July 6 to10.