It’s been a year and a half since my workplace, the Commons Studio, moved from Queen Street near the Walper Hotel to a freshly renovated storefront on King Street East, a few doors down from the Kitchener Market.

The new location is a ten-minute walk from the old, in an area I thought I knew. I’d been to the Market countless times, but as the comings and goings of the neighbourhood became part of my daily existence, its special qualities started to reveal themselves.

There’s uptown, midtown, downtown — and there’s the East End — way-downtown. When you’re here, it can feel like you’re in a whole different city.

Technically, King East begins at Queen. But the gateway to the East End is at Benton-Frederick, with the Crowne Plaza Hotel on the right and the shadowy passage along the south wall of that monument to civic folly — Market Square Shopping Centre — on the left.

This is where City Hall, the Cenotaph and the original farmers’ market once stood. 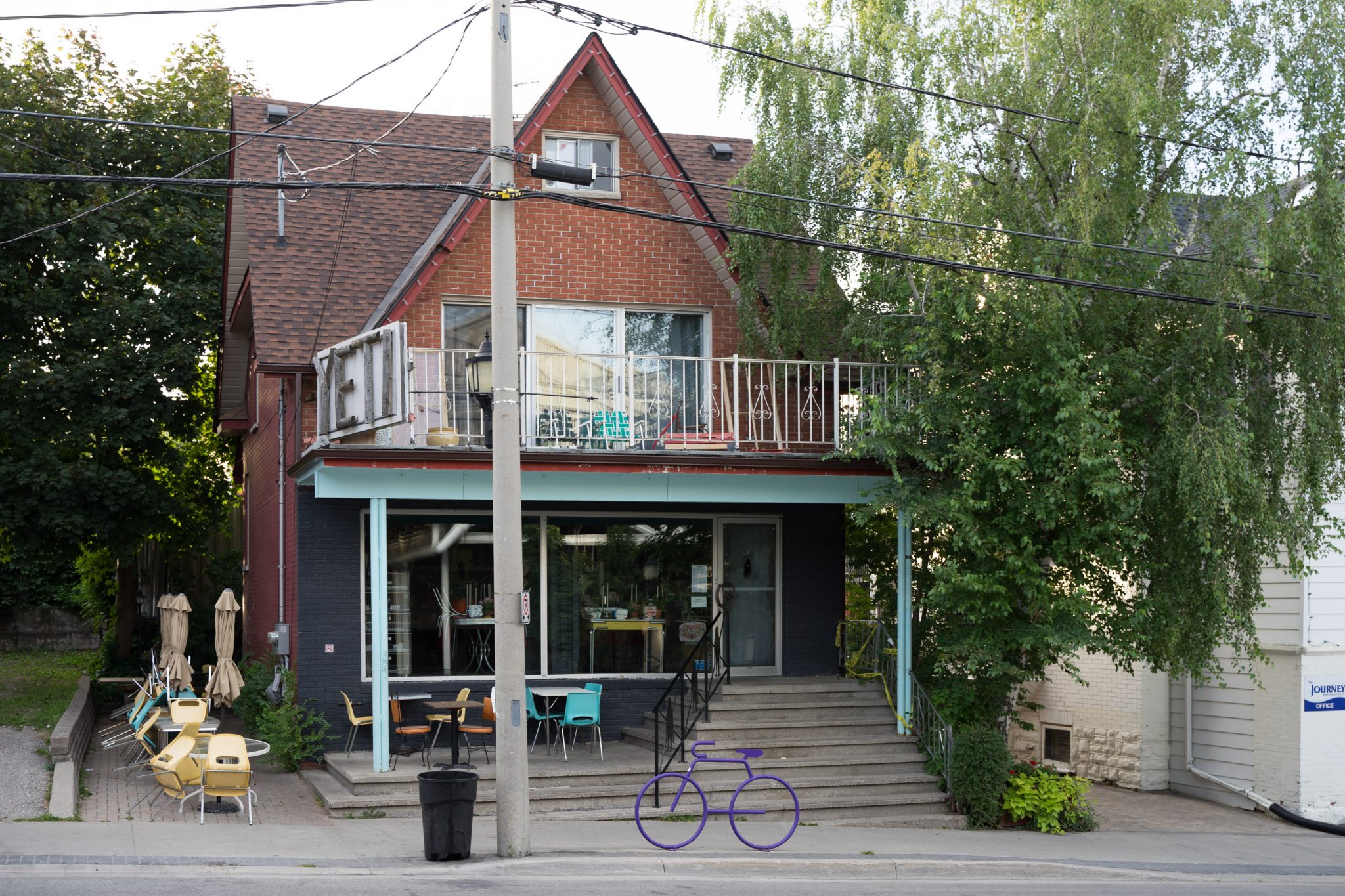 For the motorist coming from points east, south or west, the primary gateway is marked by the fountains and flowers of Rockway Gardens.

But let’s stay within comfortable walking distance of the Market — from Stirling or Cameron, say. Or from Madison, where the lower entrance to the district is marked by Ted Fullerton’s sculpture “Animanimus.”

The bronze human figure, legless, with long arms, raised on a pole over westbound traffic has always struck me as awkward. But it means well; according to the official explanation, the words anima and animus in the title signify “a fusion of soul and spirit, hospitality and business.”

When I hear “King Street East,” the first thing that comes to mind is probably the area’s extraordinary diversity. 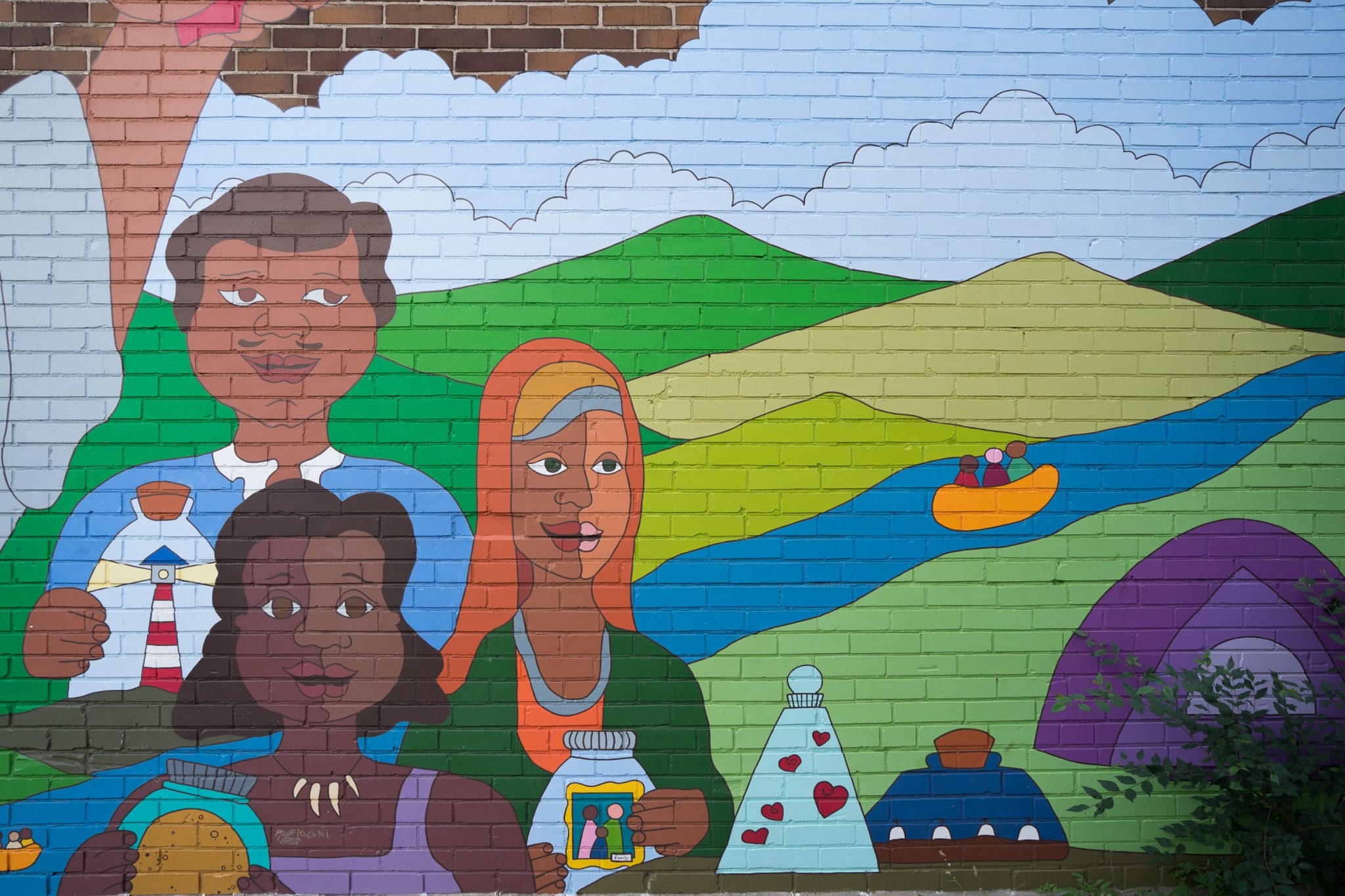 I see people from all parts of the world walk by the Studio window: some experiencing economic hardship, some prosperous (I’m amazed at the number and variety of luxury cars that park in front of our building). Some passersby are elderly, some are youthful.

Now that it’s September, students from Cameron Heights Collegiate are animating the sidewalks once again. Next year, a thousand or more Conestoga College students will join the promenade from their new campus in Market Square.

Sweet Pea, the terrazzo fountain with water flowing over huge copper peas in a pod on the Scott Street side of the Kitchener Market, signifies another outstanding King East feature: food. 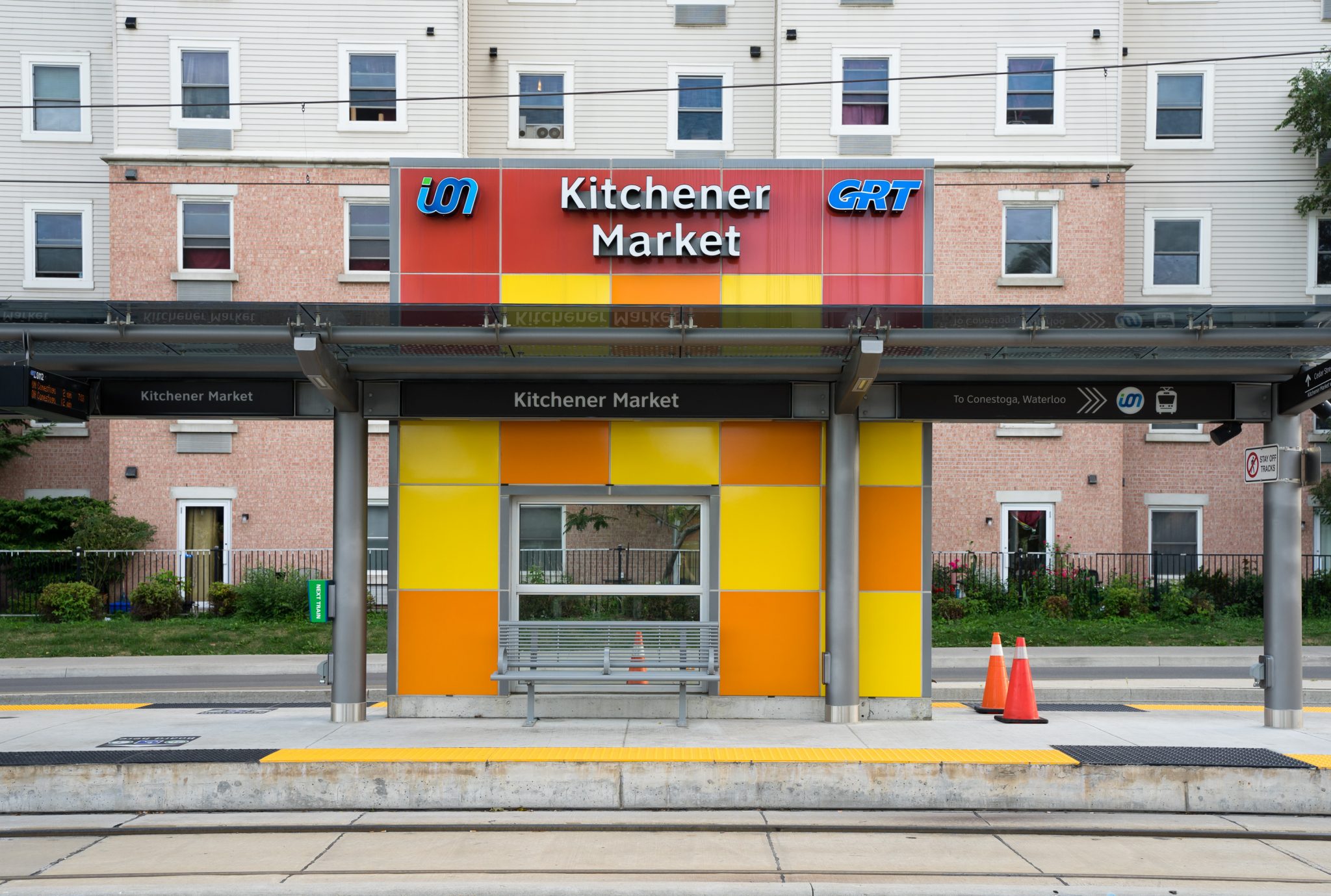 That means groceries. With the traditional Saturday Farmers’ Market, two substantial Asian food stores, a couple of great bakeries, and a range of specialty shops (Variedad Latina, SMK African Foods, Kiki’s Kitchen), the area is an oasis in what some consider a food desert.

But prepared food offerings are the district’s greatest strength, especially for breakfast and lunch (the Yeti Cafe on Eby and the International Cuisine stalls at the Market close at 3 p.m.).

The area offers a wealth of additional choices with varying hours. Besides the daily Market offerings, which are truly a wonder, current favourites among people in my circles include Banh Mi Givral Deli (Vietnamese subs), Korean BBQ (second level, Hong Kong Plaza), Nova Era Bakery (Portuguese custard tarts, tosta mista sandwich, soup of the day, but only in winter), Elevenses (home-style soup and sandwiches, friendly, formerly on Scott, now upstairs in Market Square), and above all, Izna Japanese Donburi House (in the former KW Labour Association building at 137 King East). 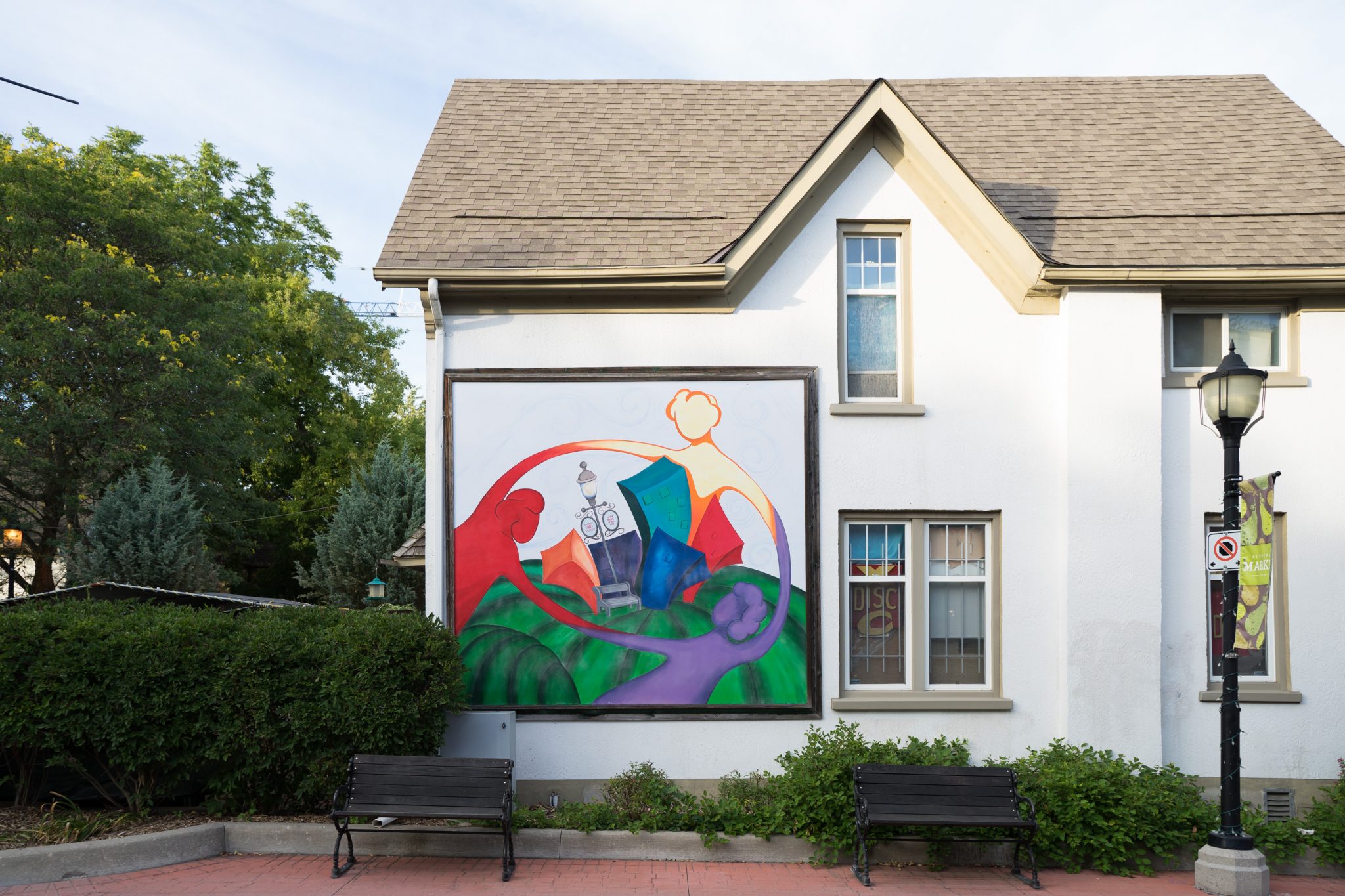 It is fascinating to observe how, over time, through trial and error, even an egregious architectural blunder like Market Square can find a purpose.

The Kitchener Market itself falls into this category. It was a disappointment when it opened 15 years ago and, I believe, has never fulfilled its potential. The success of a mid-week market experiment this summer was a very encouraging sign.

I’ve developed a genuine affection for the eccentric ‘70s-style split level complex with the big round window at 265 King East, across the street from the market. Long known as the Hong Kong Plaza, it’s great to see the proprietors taking the trouble to paint rusty railings and repair the modest fountain out front.

Hong Kong Fashion, which occupies the lower, not-quite-ground floor, is part of a strong retail clothing cluster, complemented by a remarkable range of barber shops and hairdressing salons. 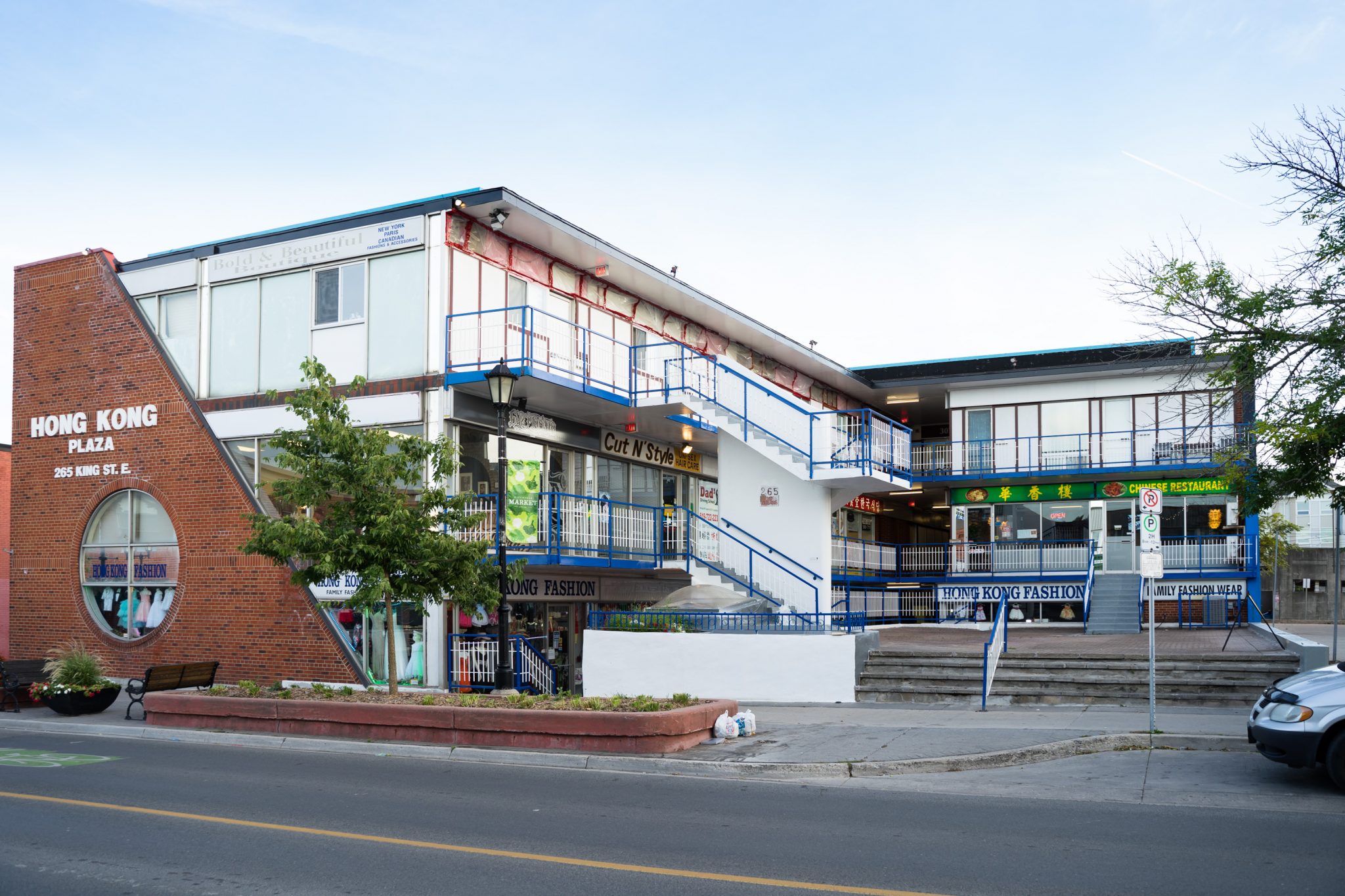 When a group of visual artists opened a co-op storefront in the East End, they optimistically called it the “Art District Gallery.”

The artists of ADC (now at 187 King East) are working with my workplace, the Commons Studio, The Working Centre’s Green Door Art Space on Market Lane and Inter Arts Matrix (hosts of X-Camera, a fabulous experimental program of workshops and Friday talks in the Café next door). The aim is to to showcase the growing artistic presence in the Market District on the Friday and Saturday of Culture Days weekend, held on Sept. 27-29.

There’s no book store, no cinema, no performance space and no artist-run centre. But the district is the home of Kitchener’s venerable Encore Records, which moved from Queen to King East a few years before we did.

An effort to re-brand the area as the Market District has had some success. But now the owners of Fairview Mall down the road have announced a major redevelopment centred around a replica factory complex, complete with a fake water tower, called the Grand Market District. 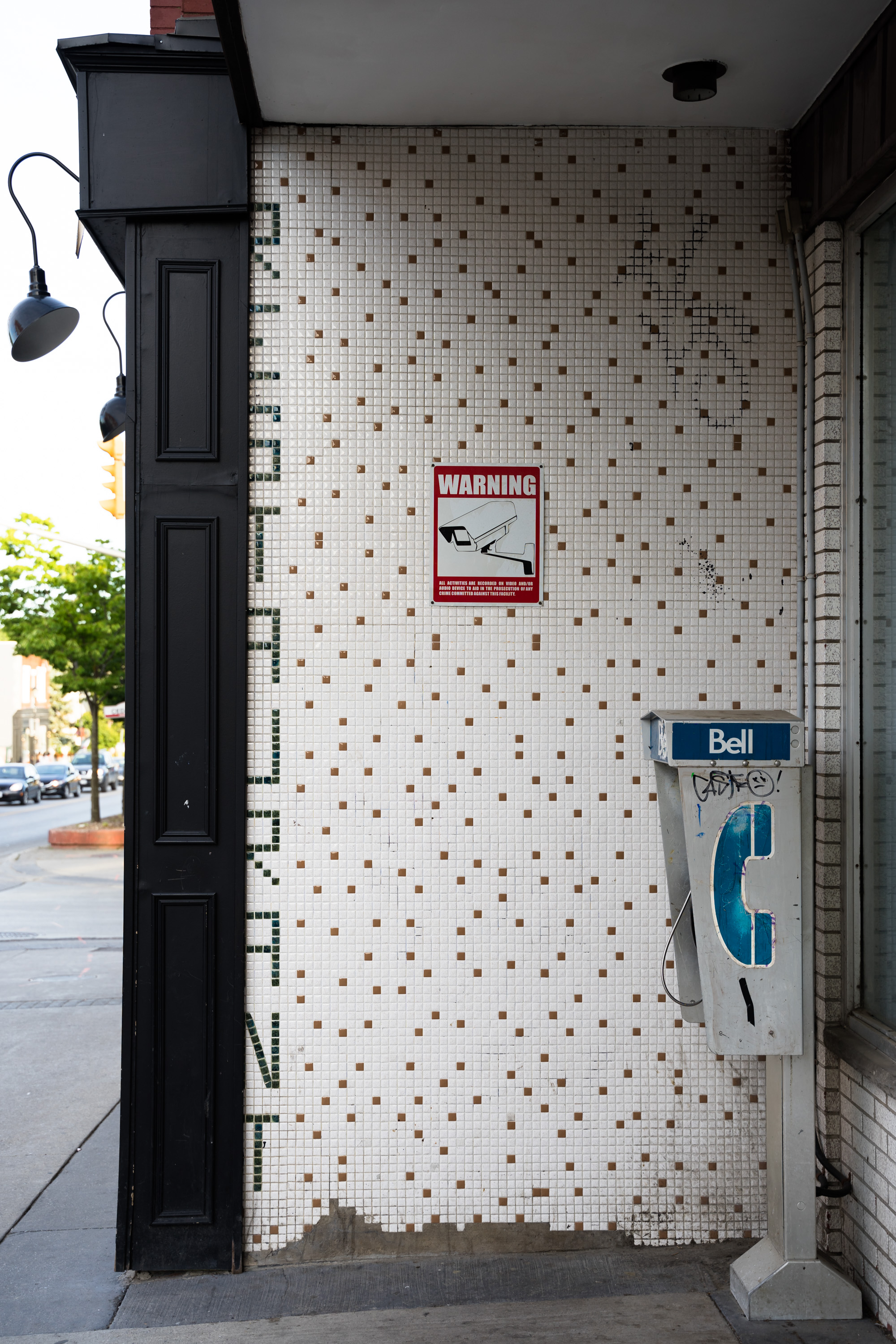 If there’s a characteristic architectural style, it’s a modest two-story storefront built in the 1920s like the one the Studio is in.

There are some treasures, like the narrow structure with modest art deco features at 243 King East that once housed Pinto’s Youth Shoppe and has now been tastefully repurposed by NEO Architecture.

I was happy to see new windows installed at 137 King East, a handsome three-storey edifice that dates back to 1922.

Regardless, the area has always been in flux. King East appears to have flourished briefly during the early days of the motor car. The Depression came next, then the war. With the rise of automobile-centred suburbs, shopping centres and strip malls in the 1950s, stagnation in the East End started to look permanent.

As result, the area has had a reputation as Kitchener‘s “skid row” for almost a century.

The marked presence of people who live on the margins of our community is an aspect of King East culture that cannot be overlooked. The Commons Studio is a project of The Working Centre, which is one of a number of agencies in the area that help marginalized groups.

For me, this is part of what makes the East End authentic. When you get to know people, stereotypes tend to disappear. They are individuals, each with their own stories, longings and proclivities.

There is no denying, however, that the presence of so many who live precarious lives is an all too real problem that, despite all efforts, is likely to get worse before it gets better.

But, this need not be an insurmountable obstacle to a flourishing Market District. 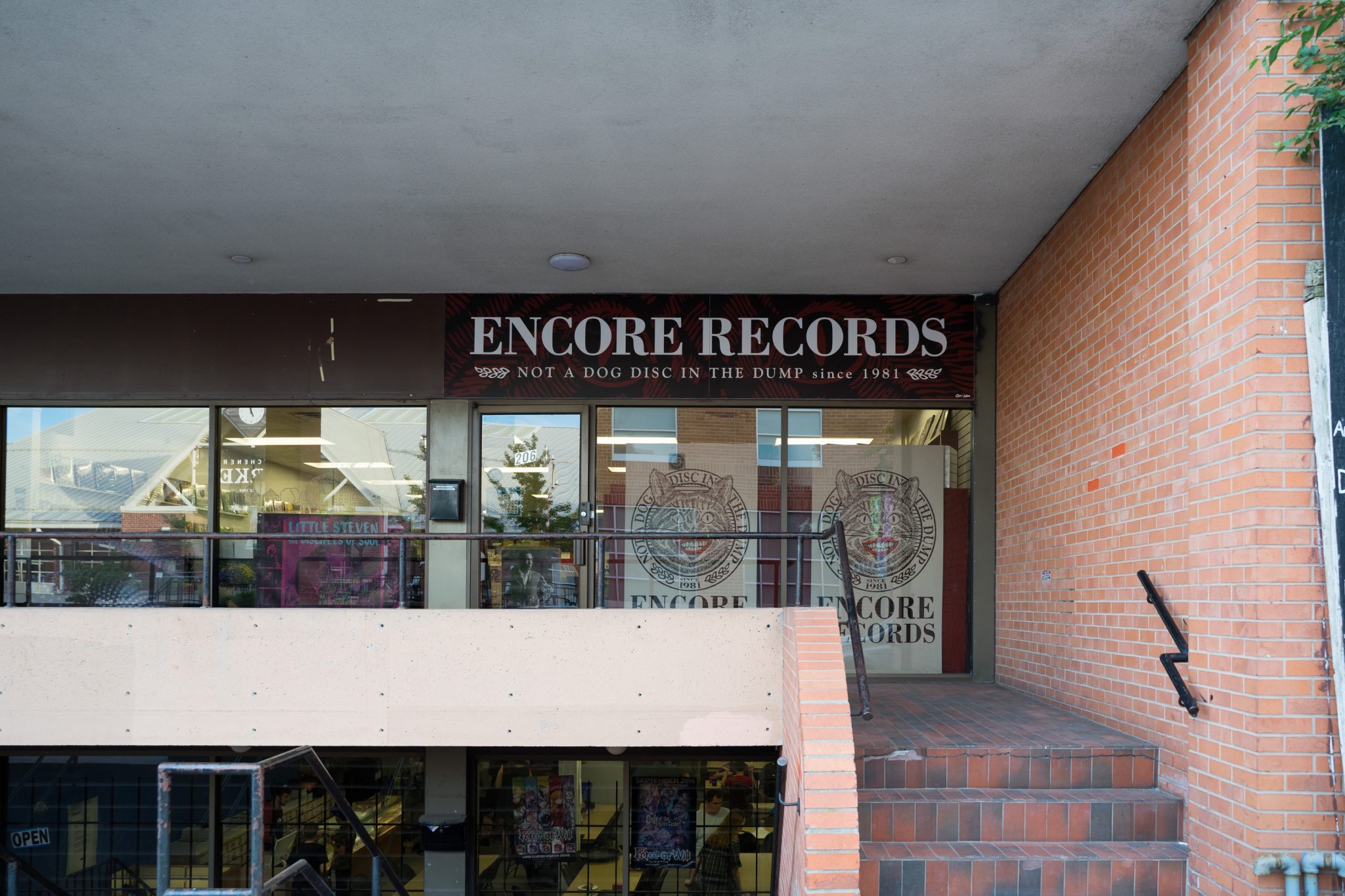 With the system’s 90-minute transfer limit, you can hop on from anywhere along the line, stop by the Market District for a meal, a stroll, maybe a quick purchase and then make your way back on a single fare.

Thanks to the LRT, a number of major construction projects are currently underway in and around the area that will bring thousands of new residents.

If you look over the fence around the building site at 387 King East at Cedar, you’ll get a glimpse of the very ground the city is built on: Sand Hills, they called it at one point, because Cedar Hill is a massive pile of sand.

A friend reminded me of a slogan from the Paris protests of 1968: “Sous les pavés, la plage!” which translates to: “under the pavement, there is a beach!”

It’s a motto that could be applied to central Kitchener, East or West — for if you look beyond the concrete walls, there lies beauty.