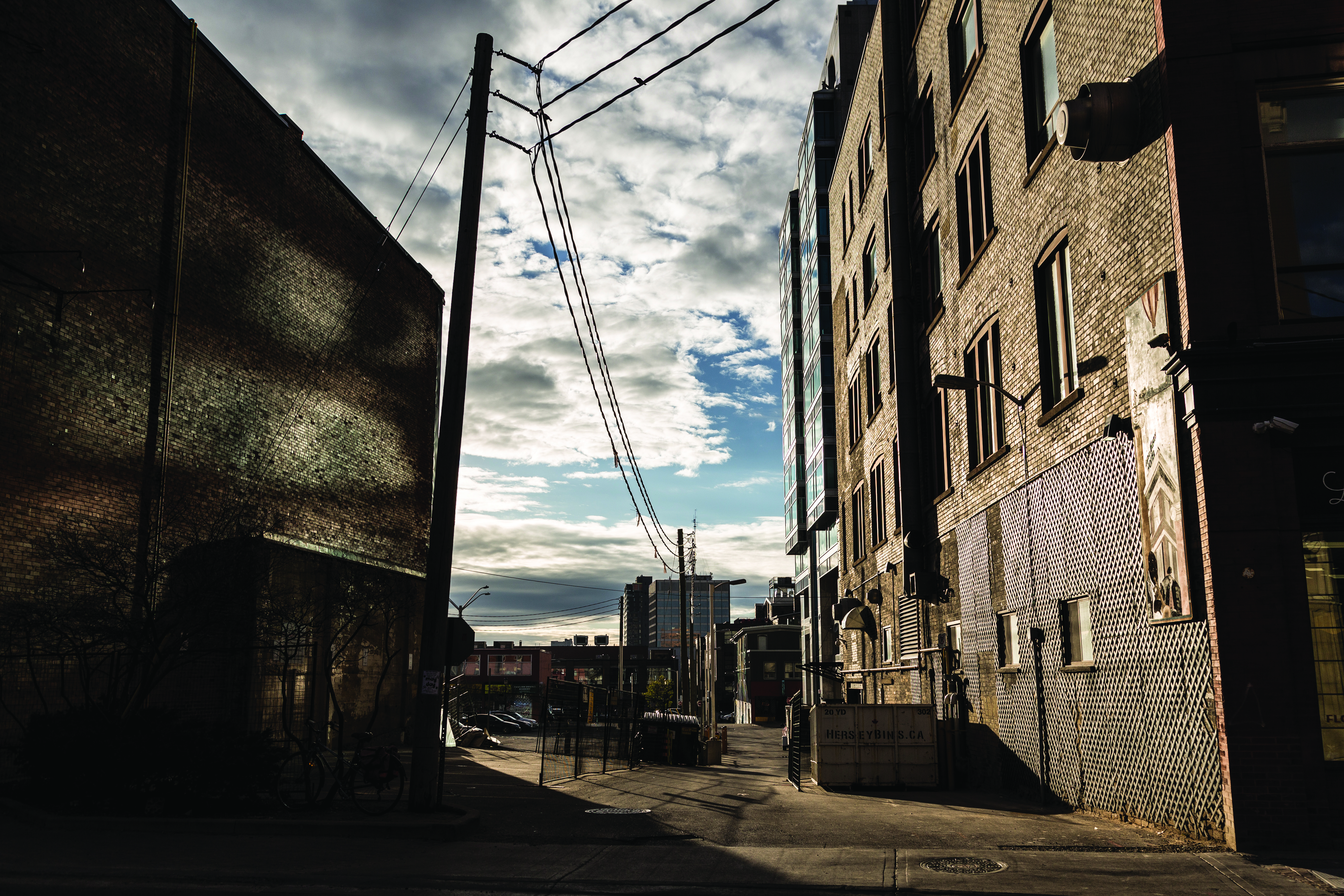 Halls Lane is a hidden laneway that runs parallel to King Street through downtown Kitchener. A great way to get through downtown on bike or foot, the Lane also presents passers-by with a curious view of Kitchener’s history. I recently had the chance to chat with local history buff Joe Mancini about Halls Lane. Mancini and his wife Stephanie are the founders of The Working Centre, which has purchased and revitalized three old buildings on Queen Street beside Halls Lane to house some its many social initiatives.

We started our tour looking at a poster located inside the Queen Street Commons Cafe, a project of The Working Centre at 43 Queen Street South. (If you happen to be reading this edition of TCE at the Commons, you can follow along by checking out the local history posters at the front and back of the Cafe.)

“It might be best to start with the Kitchener Opera,” said Mancini. “Halls Lane used to lead there.”

The Kitchener Opera House first opened to the public in September 1896. Financed by Abel Walper, who owned The Walper Hotel, it sat up to 600 theatre-goers at one time.

The Opera House was located at the back of The Walper, facing Queen Street, where it became a central node in what was then called Berlin. Weekly performances cost anywhere from 15 cents to a full dollar. As other theatres appeared in the city, the Opera House was converted into a film theatre called Star Theatre. But ultimately it couldn’t keep up with bigger venues and was forced to close down. An extended section of the Walper Hotel now sits on its foundations.

Walking to the back of the Cafe, Mancini pointed to a picture on another poster. It depicts a building that no longer exists but would have been right beside Halls Lane, on the south side of Queen Street.

Users of Community Access Bikeshare (another Working Centre initiative) might recognize this spot behind the CIBC building as a place to borrow and return a bicycle, but it used to be the home of the Berliner Journal Printing Company. The Company produced a weekly German newspaper called the Berliner, founded in 1859 by a partnership made up of John Motz and Frederick Rittinger.

“So this was kind of the hub of Berlin,” Mancini said about the old German news press.

However, as the first world war began, popular opinion about the region’s German residents grew negative. In 1916 the city’s name was changed to Kitchener, named after a British colonial administrator who had recently died in the war. The name change itself was an undemocratic process because it did not have popular support, and when the referendum was pushed through it did not include the option to keep Berlin.

“After the war, with the German language on the defensive,” Mancini explained, “the Motz’s combined the Journal with the local English paper, which ultimately became The Kitchener-Waterloo Record,” now the Waterloo Region Record.

We went out the back door of the Cafe and made our way to the left towards Halls Lane. “People were making stuff in small buildings and shacks in the back here,” Mancini mentioned.

“There was a little bit of a fledgling buggy and car industry.”

At the place where Halls Lane crosses Queen Street, Mancini launched into the history of the intersection.

“You have to start by putting into perspective that it was only laid out in the 1850s, the first plan was 1854, I’m pretty sure. Essentially [Halls Lane] was the cattle path.”

Mancini pointed north to King Street: “That was the main street to Hamilton, or Dundas, coming all the way from Niagara.” He then faced south, towards the Joseph Schneider Haus museum.

“There were German immigrants living on [Queen Street], one family was named Nahrgang, and one of whom married Joseph Schneider’s daughter. I’m pretty sure that, in return for marrying the daughter, [Nahrgang] got a big chunk of land.”

“I like this guy,” Mancini said of Aaron Brickers. The first business he established there along with his brother Ephraim was a blacksmith in 1880, but he shortly thereafter started a livery, or stable, where owners could pay to park their horses.

“I like the image of the livery,” Mancini said, before referencing the dramatic changeover from horse to cars during the turn of the 20th century.

“Brickers is running a livery from the 1880’s to 1905 and he thinks, ‘Well, the livery is not going to be here forever.’ He starts building new buildings. In 1907, he gets rid of his livery. So he was kind of ahead of it. There’s that sense of innovation.”

By this point in our conversation we were on Halls Lane, facing the back of The Working Centre. During a lull in his storytelling, I asked Mancini what he thought of the view from where we stood.

“No so good. Pretty ugly. No, it doesn’t look great,” Joe acknowledged candidly. He remarked that it’s hard to believe the building there now is the same pristine building that is pictured on the poster at the back of the Cafe. Years have taken their toll, and by-law regulations have made the exterior less minimalist than its original expression.

And yet, despite the less-polished view, Halls Lane embodies a trend of Kitchener’s industrial history: buildings built by people appreciative of the place they lived and used for a variety of different purposes. It is something that the tech industry has really engaged with, and the resulting architectural dynamic fits with this notion of innovation. So while these buildings are raw, faded by the elements, rusty and stained, they are also the sturdy homes to many stories. It’s good to be reminded every now and then.