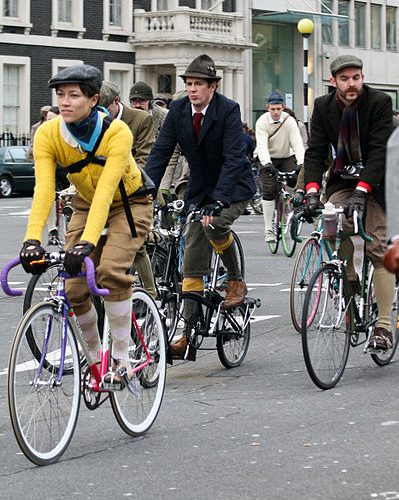 I may not look it, but yes, I’m a cyclist

Recently, I began a new job downtown. In terms of location, I couldn’t be happier with my new situation. Even before the job, a typical week for me entailed several trips downtown, 99 per cent of which I make by bicycle. Errands, shopping, the library, getting some work done at a coffee shop; downtown is always my preferred destination and my bicycle is always my preferred way to get there.

While my daily route has changed little since my newfound employment, my new co-workers’ reactions to my travel patterns seem drastically different amongst my new co-workers than what I’m used to. As I begin the process of learning a new job and its environment, I have found myself with a small, and odd, kind of celebrity. People can’t seem to believe that I ride a bike not for fun, or for exercise, or for competition, but because it’s the easiest and most convenient way for me to get to work.

My plain grey dress pants are a source of great wonder to some, or perhaps it’s that I have the audacity to wear these plain grey pants while riding a bike that has caused this stir. I am a curiosity strictly because I am a seemingly normal person, with a normal job, wearing normal pants, arriving to work in a way that as few one or two per cent of the rest of the region does.

Though I had never really thought about it before, it has since become clear to me that I don’t look like a cyclist; I possess none of the tribal artifacts of my assumed clan. I wear no Lycra, nor riding gloves, nor toe-clip shoes, nor helmet; nothing fluorescent at all. By appearing ’normal,’ I am a sartorial interloper, rolling between two distinct worlds. This distresses people, because I don’t look like a Lance Armstrong wannabe. It subverts their expectations of who should be on a bike.

The idea of “normal” becomes quite powerful in the context of behaviour. For some people, actively standing out comes naturally, and they embrace the attention it brings. But not everybody is interested in turning heads, and doing things that are ostentatiously different can be intimidating. This isn’t an indictment of standing out, or of competitive cycling fashion; wear what makes you comfortable.

When an activity such as cycling becomes so completely defined by the style of one special kind of user, that definition begins to present significant barriers to entry for other, less specialized users.

You see it in both the specialized clothing and in the kinds of bikes available to purchase at most local outlets – mountain bikes, racing bikes, trick bikes, but rarely the kinds of dignified upright commuters that save backs and match slacks.

Wildly dangerous speed limits and disconnected, underfunded cycling networks are the great challenges standing in the way of turning cycling into viable transportation in this community. But in the face of these too-big-for-me problems, allowing people to feel normal when they ride might be a good first step.

Branden Wesseling is a transportation advocate with TriTAG (tritag.ca). He can be found on Twitter as @KitchenerBikes.