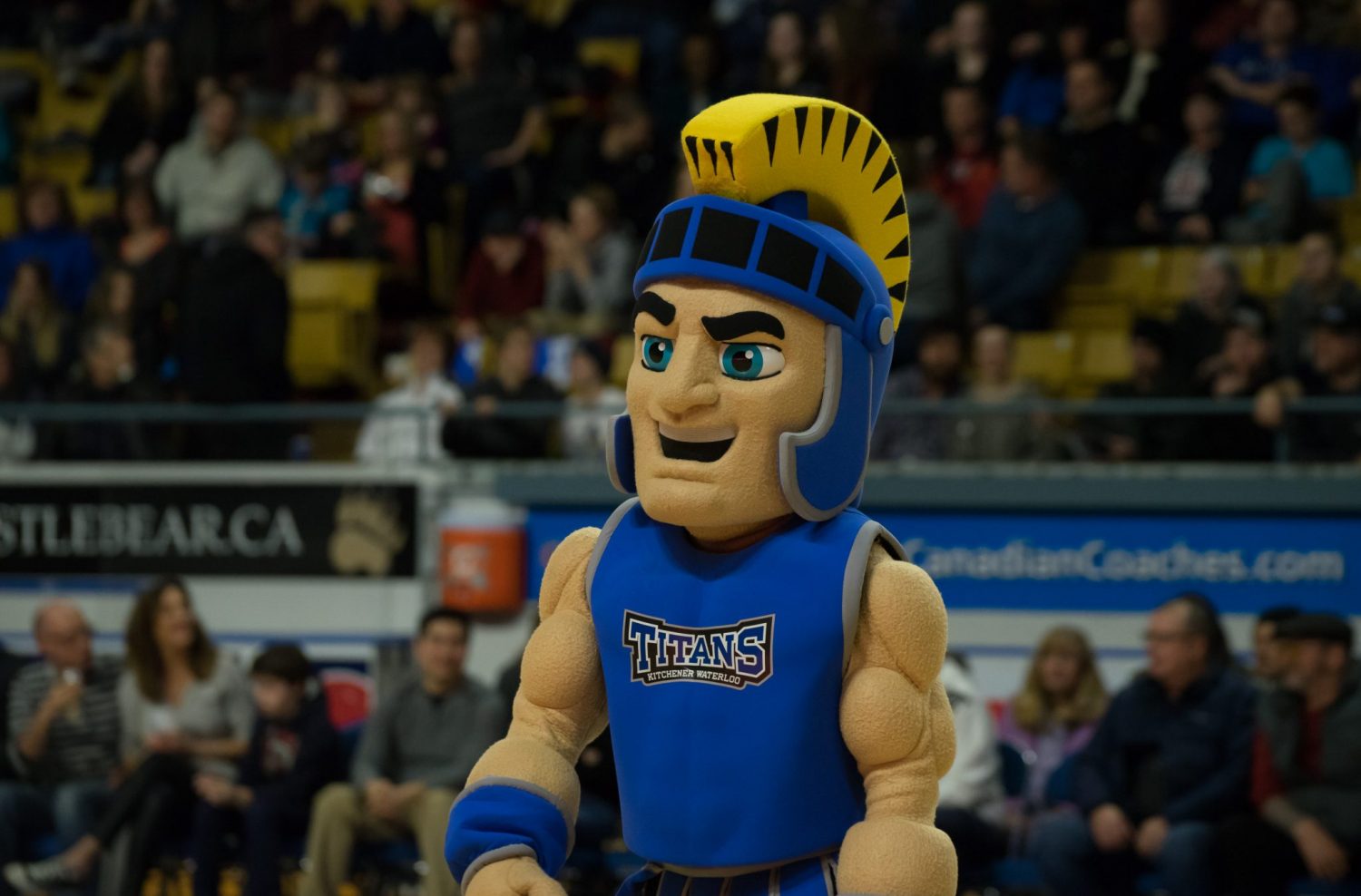 I picked a great night to attend my first KW Titans basketball game at the Kitchener Auditorium in January. By the end of the second quarter, the Titans obtained a six-point lead over the Prince Edward Island Storm.

At the final buzzer, the Titans won by four points in a tense overtime period, 137 – 134. Energy from 1300 fans had the arena buzzing during the whole game, but it went off the charts for an extra ten minutes filled with a lot of player fouls.

The vibe of this National Basketball League of Canada game is typical for many local sporting events; fans clearly knew their favourite players by name. The dance pack got huge appreciation from the crowd and resident DJ Richard Gooden received massive love for his music contributions. Free-throw contestants made their best shots with applause from the audience. A cowbell rang out to hustle the players down the court.

Players from Wildhawk Basketball, a youth skill development league in Waterloo Region, stormed the court at half-time for ten minutes of impressive play, their dreams of basketball stardom as visible as their little pounding hearts.

I’m not a sports fan, particularly, nor do I follow any team. But, I have been known to take in a match or game because I rather like the vibe and energy that goes along with sporting events in places I’ve traveled. I love the music, the chants, the dances, the fan engagement contests and traditions for player recognition. I love learning about team legends and history and even their mild (or major) scandals.

I stood in the streets for a Grand Prix cycling race in Bermuda. I took my seat among 50,000 football fanatics for a Sporting Lisbon match at the Alvalade XXI stadium. I go to the occasional Toronto Blue Jays baseball game. I attended a Super Bowl party, once, and I’ve watched FIFA World Cup football games in pubs around the world. I’ve even participated in a March Madness college basketball pool, just for the smack talk that goes along with colleagues playing for bragging rights.

Kitchener, and area communities in Waterloo Region, has a collection of hometown teams that are easy to access for a fraction of the ticket price commanded by professional franchise teams. The up close experience with local sports puts team spirit and pride on full display. In addition to the KW Titans, who have regular games until the end of March, there are a few other options for traveling like a local to get your sports fix this spring season.

1. Tri-City Roller Derby is an all-women’s flat-track derby league based here in Waterloo Region and they are as bad-ass as they come. 2019 Season tickets are on sale now for home bouts, which take place at Moses Springer Arena, Waterloo Rec Complex and New Hamburg Arena.

2. Kitchener Panthers, founded in 1919, have played 100 seasons of baseball. Find this local institution and their regular games at Jack Couch Stadium, a 1400 seat field beside the Kitchener Auditorium.

3. Learn about Lacrosse with the KW United women’s lacrosse team and the KW Braves Junior ‘A’ Lacrosse Club (men’s).

4. Kitchener Rangers, a perennial local favourite, has regular season games until the middle of March. Act quickly because these games can sell out.

5. More of a summer event, but I include it here because I’ve been to this race and it’s super exciting. The Ontario Cycling Association hosts a criterium road race on a 1.3 km loop course around Victoria Park in downtown Kitchener. It’s up close and personal with clicking gears and a menacing peloton trying to catch the break-away riders. Women’s and men’s races of various age groups happen throughout the day. Tentative date for the Twilight Grand Prix event is Saturday July 27.

You don’t have to be an athlete or a fanatic to engage in local life through sport. In fact, a local sports event can be a great way to experience a destination’s sport traditions and culture. Guaranteed, someone will be there with a cowbell to cheer on the home team.