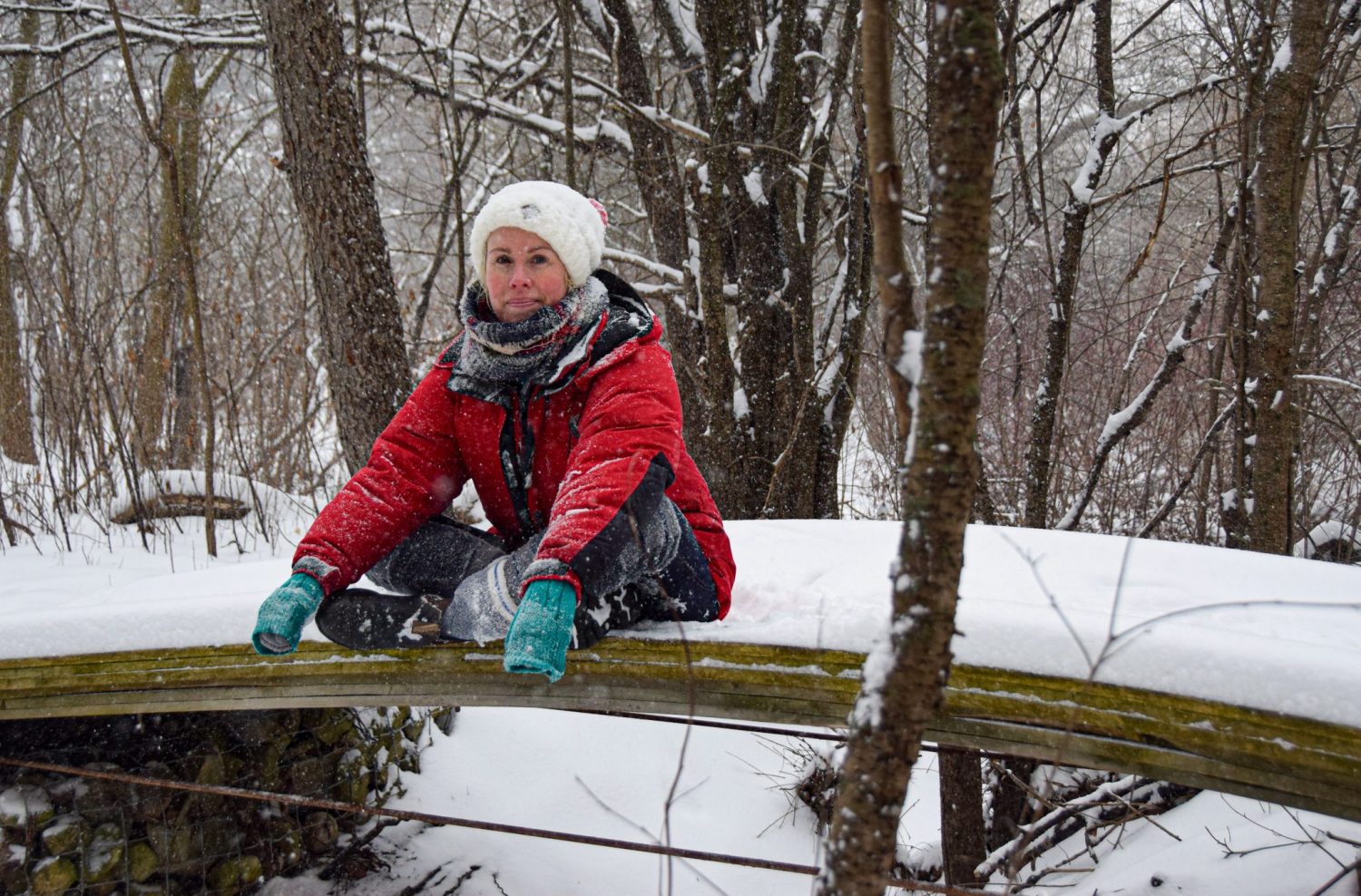 As the snow piled up on a Saturday afternoon Charlotte Clarke and I parked on Shakespeare Drive, just a few houses west of Coleridge Drive in Waterloo’s Beechwood neighbourhood. Clarke led us straight to a small footbridge tucked in the trees on the south side of the street. The bridge is visible from the road, but the path beyond is swallowed up, like a portal into an unknown world.

“In the spring or summer, I’ve come to Clair Lake Park to read. I sit right here, over the running water of the creek,” Clarke said while testing the bridge for ice. “But the snow makes everything so quiet, it’s a different kind of peaceful.”

Beyond the bridge, we followed scattered footprints beside Clair Creek leading us to the lake and open green spaces of this 22-acre park and environmental reserve. “Unless you live in this neighbourhood, hardly anyone knows the lake and creek are here,” Clark said.

Clarke has spent 21 years finding and exploring natural or urban spaces in Kitchener and Waterloo since she moved here from Ottawa in 1998. She studied for a B.A and M.A in Rhetoric and Communications Design at the University of Waterloo and stayed after graduation to work in various freelance, communications and non-profit sector jobs. She currently works as a communications officer at Wilfrid Laurier University.

“Most of my adventuring is local because I can’t go further, I get anxious,” Clarke said.

Towards the end of high school, Clarke developed agoraphobia after experiencing a series of health issues. Even decades later, the fear of becoming unwell or getting sick (physically or emotionally) and not being able to get to a safe place can cause anxiety and panic for her. As a result, Clarke has often avoided potential anxiety-inducing situations such as large crowds, public transportation or trains, riding in cars and sometimes public spaces.

Travel is a particular challenge.

“My mental health issues have deprived me of a lot of experiences. I’ve never been overseas, I haven’t been farther than Lake Placid. I haven’t been very far at all and I want to change that.”

Local explorations by bicycle and long walks to spaces like Clair Lake Park have been part of Clarke’s therapy to work on her anxiety and mental wellness. The added bonus? She has come to know the city and local community in a way that she might not have otherwise. She jokes, but half-seriously, that she has a growing roster of “weird locations and backdrops that are perfect for video shoots or band photos.”

Recently, Clarke began making short YouTube videos to share her outdoor explorations. So far she has covered Lakeside Park in Kitchener, the community of Bridgeport and a wild natural space near Bechtel Park.

“I want people to be delighted by what they see, then go out and have their own experiences,” Clarke said.

Her YouTube channel is called “Exploring Waterloo Region with Charlotte.”

Clarke’s hyperlocal travels are a testament to being creative about “living with constraints and not being crushed by them.”

“I’ve constructed a life, a full, rich life that occurs within 20 km.”