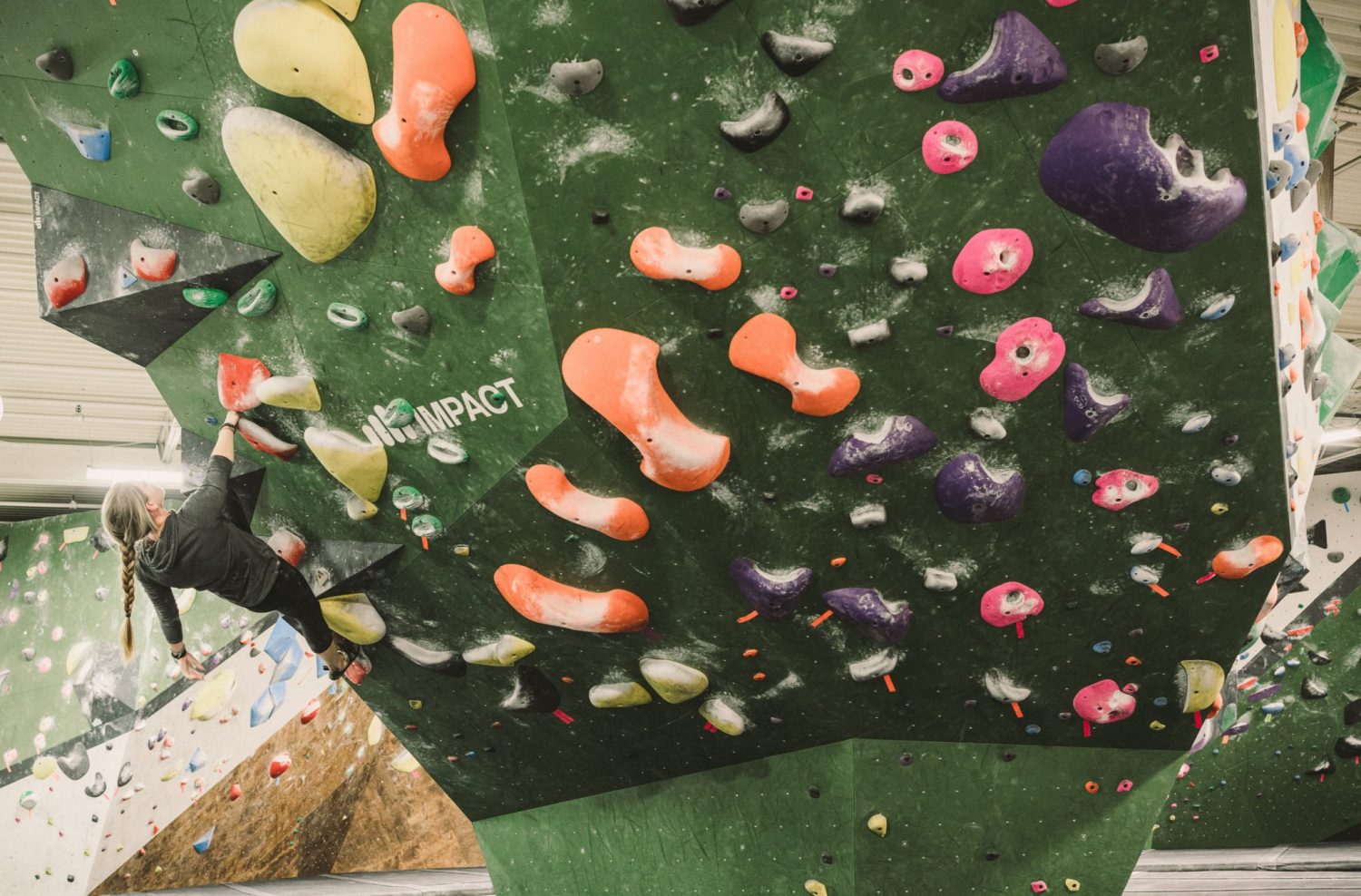 When four college friends and seasoned climbers Josh Tuffin, Christoff Leroux, Scott Hamill and Michal Cieplak were throwing out ideas over beers and going to punk rock shows together back in their early 20’s, little did they know that those dreams would one day become a reality with Grand River Rocks.

Back in the day, there wasn’t much around in terms of places to climb in the Region other than the now closed Higher Ground in Kitchener according to Tuffin and Leroux.

“Me and Mike got our first route setting jobs there by accident. The desk staff gave us the keys to the gym. We were all in there at night drinking beers, and the owner comes in and asks ‘who let you in here? Well, you gotta be gone by morning and can I have a beer’? That was it,” Tuffin said.

They say it was dumb luck that they got the original Grand River Rocks location back in 2011 in an old warehouse. The 8000 square foot facility is a combination of sturdy industrial construction and 38 foot ceilings on Borden Ave in Kitchener which houses their rope climbing and bouldering routes. 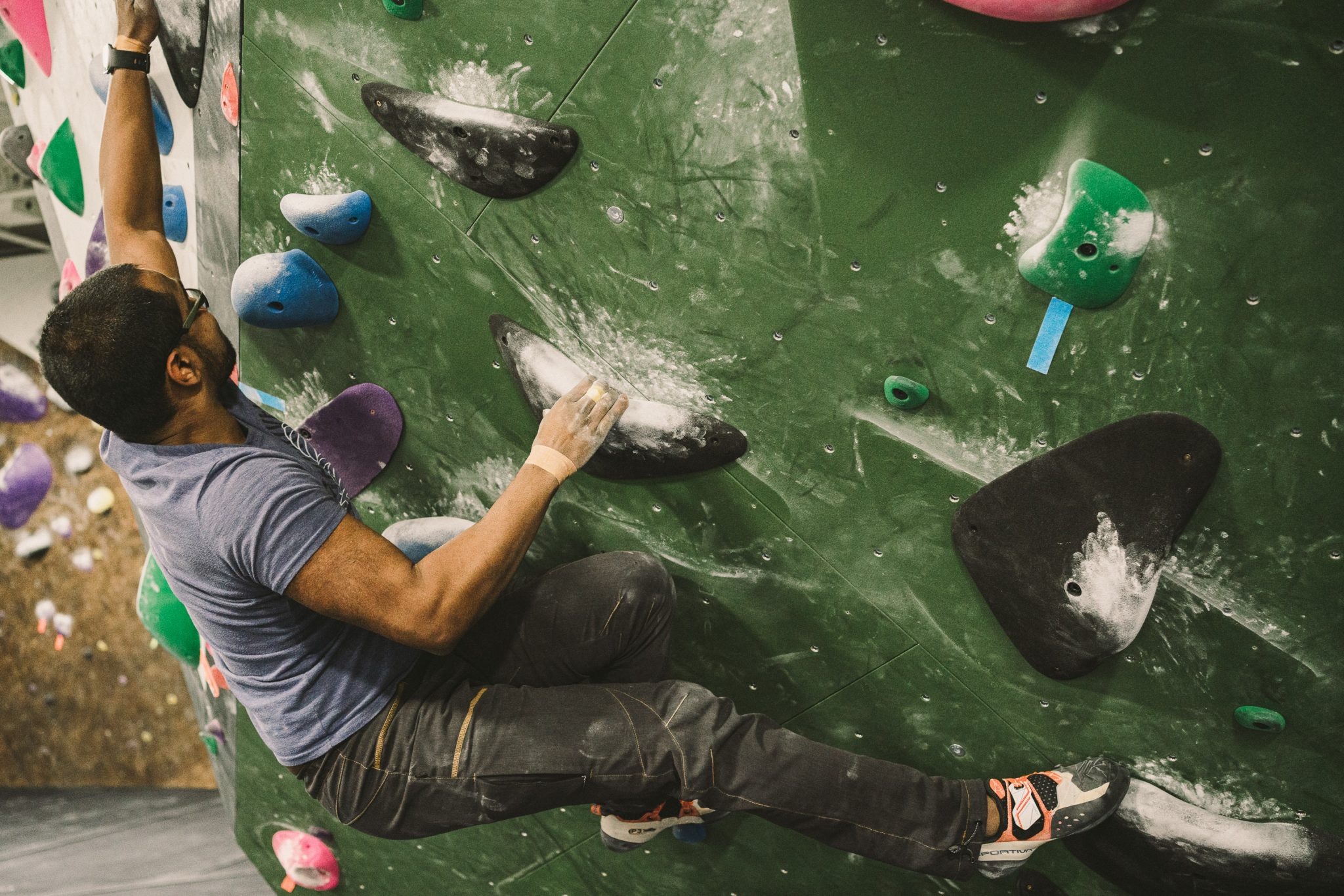 “So in all reality that was the best lining up of dumb luck. There was a lot of hard work, but we were in the right place, at the right time with the right situations,” Tuffin said.

Their first obstacle was getting the original location, which already had three backup offers on the building and all of them wanted to turn it into a climbing gym. With a mixture of bank and family loans, they made an offer and GRR began.

According to Leroux, it was a heavy learning curve to make the business work without investors and just make things work as best they could.

“There were multiple talks that, hey, if this goes belly up everybody’s ok with fleeing to Mexico and just moving out of the country and ignoring the debt,” Tuffin joked.

Luckily for them, the Kitchener climbing community was in dire need of a new place to climb as long-time gym Higher Ground had recently closed. The entire member-base was now driving to Guelph for the closest climb. 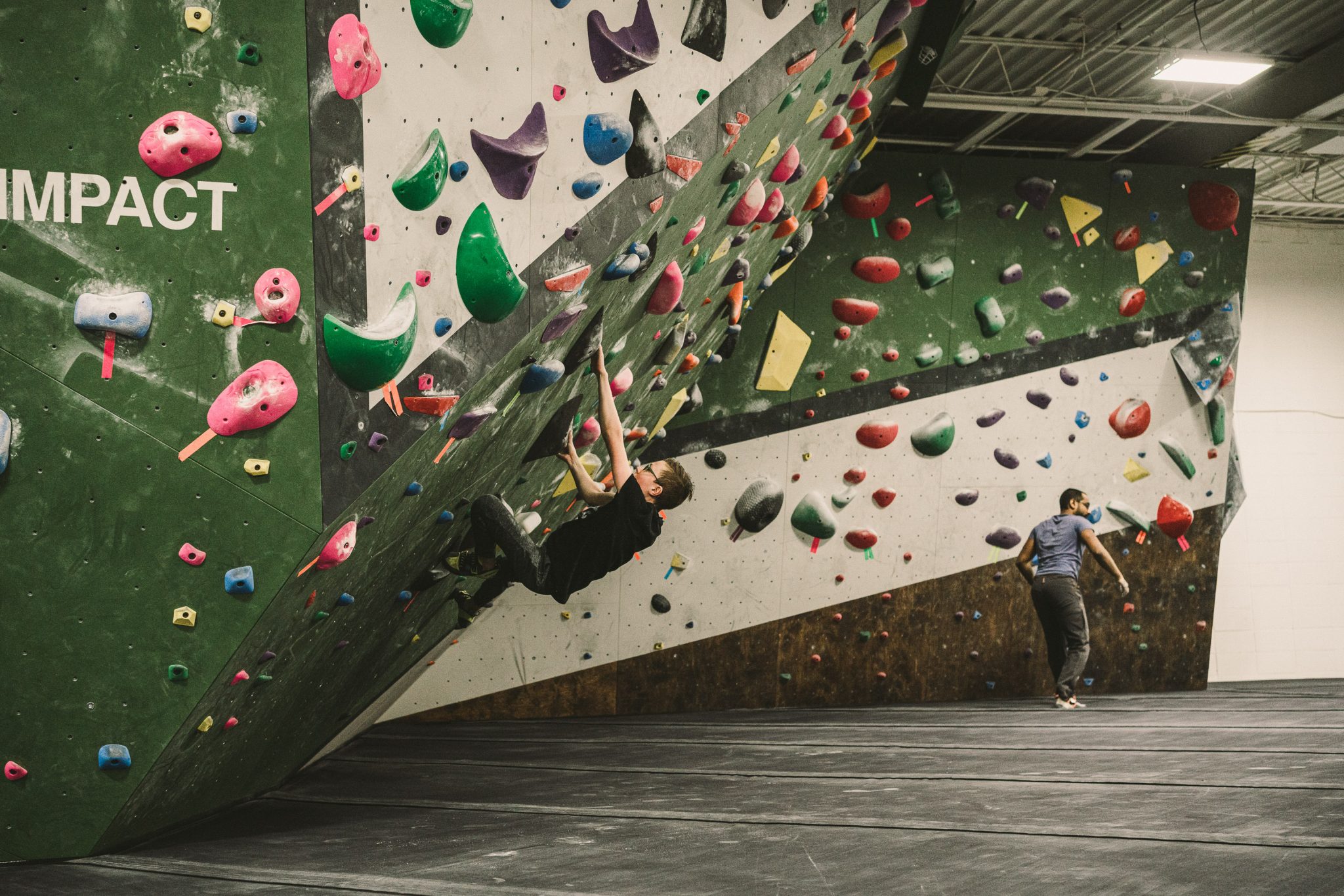 “When we opened the door – day one we had a lineup. It wasn’t like, crack the door, 20 people come in, it was total bananas. We started to realize there was a bigger community than we thought,” Tuffin said.

Building off the success of GRR Kitchener, their new Waterloo location at 80 Lodge St has been up and running since December and inspiring a whole new generation of climbers.

When asked how other climbing gyms opening recently in the Region, like The Core in Cambridge, have impacted their business Tuffin said, “all it does it make more climbers, so it’s less of a fight over a pie rather than everybody keeps making a bigger pie.”

They thought opening the new location would mean freeing up space at the old location and members would take advantage of the new routes. What they found instead was that they have new community members joining all the time – a whole new generation of climbers are trying out bouldering for the first time and loving it.

“There is a growing community. Climbing is becoming more mainstream. I mean Alex Honnold was just on the cover of GQ magazine talking about how everybody boulders. You’re having an average of seven [climbing] gyms opening in Ontario a year and in very close proximity to each other,” Tuffin said.

Finding their spot for GRR Waterloo was the hardest part of making it happen. Sourcing a building was a difficult process and according to their real estate agent, the Waterloo Region had an occupancy of one percent on industrial buildings. So there were almost no buildings available for them, but they knew if they didn’t do it somebody was going to.

“The nice thing is that this is essentially our fourth time doing this between the original gym, the expansion, Go Bananas [their kids climbing gym], and here. We had a much more concise  idea of what works,” Tuffin said.

The new building housing GRR Waterloo is a 12,500-square-foot facility which differs from flagship location in Kitchener as a boulder-only facility. 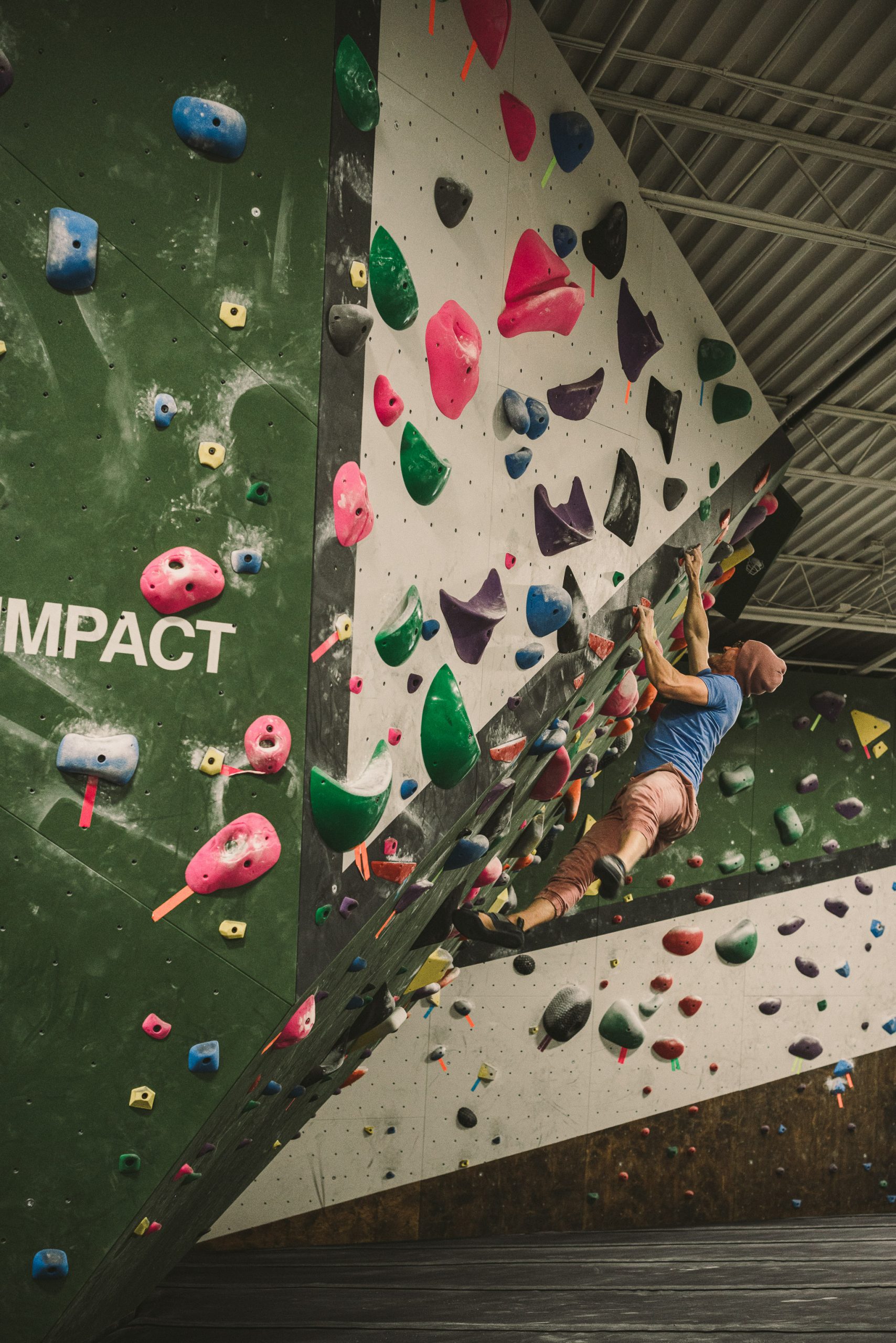 “We built a lot of this physically ourselves swinging hammers – the changerooms, the cafe, the front desk – that was all of us the four owners building it, and Cornelia our manager is absolutely amazing,” Leroux said.

What they want the public and people who are brand new to climbing, or have never heard of climbing to know is that climbing is for everyone and for all ages. All you need is a set of climbing shoes.

“I think climbing, especially if you are of a certain age has a stigma that it’s an extreme sport. I think that is changing in a lot of ways. It’s a very family-oriented sport nowadays. We have a group of old guys in their late 60’s early 70’s. It’s a life sport. If you can get into it and take your time, it’s not an expensive sport to get into,” Leroux said.

The sport is becoming much more inclusive and less intimidating, especially for women who climb. Rock climbing and bouldering used to be mainly a boys club but GRR is going out of their way to make sure this is a thing of the past.

“We are in a really good era of climbing where it’s a much more inclusive thing. If you got into climbing around 2000 it was a very bro-y, very male, everything was very reachy. It’s now something where when the routes are put up it’s taken into account different body types, different heights, different hand sizes. We also have female setters. On an average busy day, you can’t tell if there’s more men or women climbing,” Tuffin said.

For women who want to try climbing and may feel more comfortable learning from female-identified climbers, they have a women’s climbing group.

“It’s designed to get women who are interested in climbing in a space where they can talk to other women,” Leroux said.

One of the common things that stop people from trying out climbing is a fear of heights or the concept that it’s dangerous. Their advice is to try bouldering, which is quite safe and many people with fears find easier to tackle than rope climbing.

“With bouldering, the walls are shorter and at this location, we have downclimb jugs, holds peppered in the wall so you are always able to climb down to a distance that you’re comfortable to drop down,” Tuffin said

And for technical or more experienced climbers, the newest and biggest draw is the MoonBoard training tool they’ve installed in their weight training/workout area at the Waterloo location. 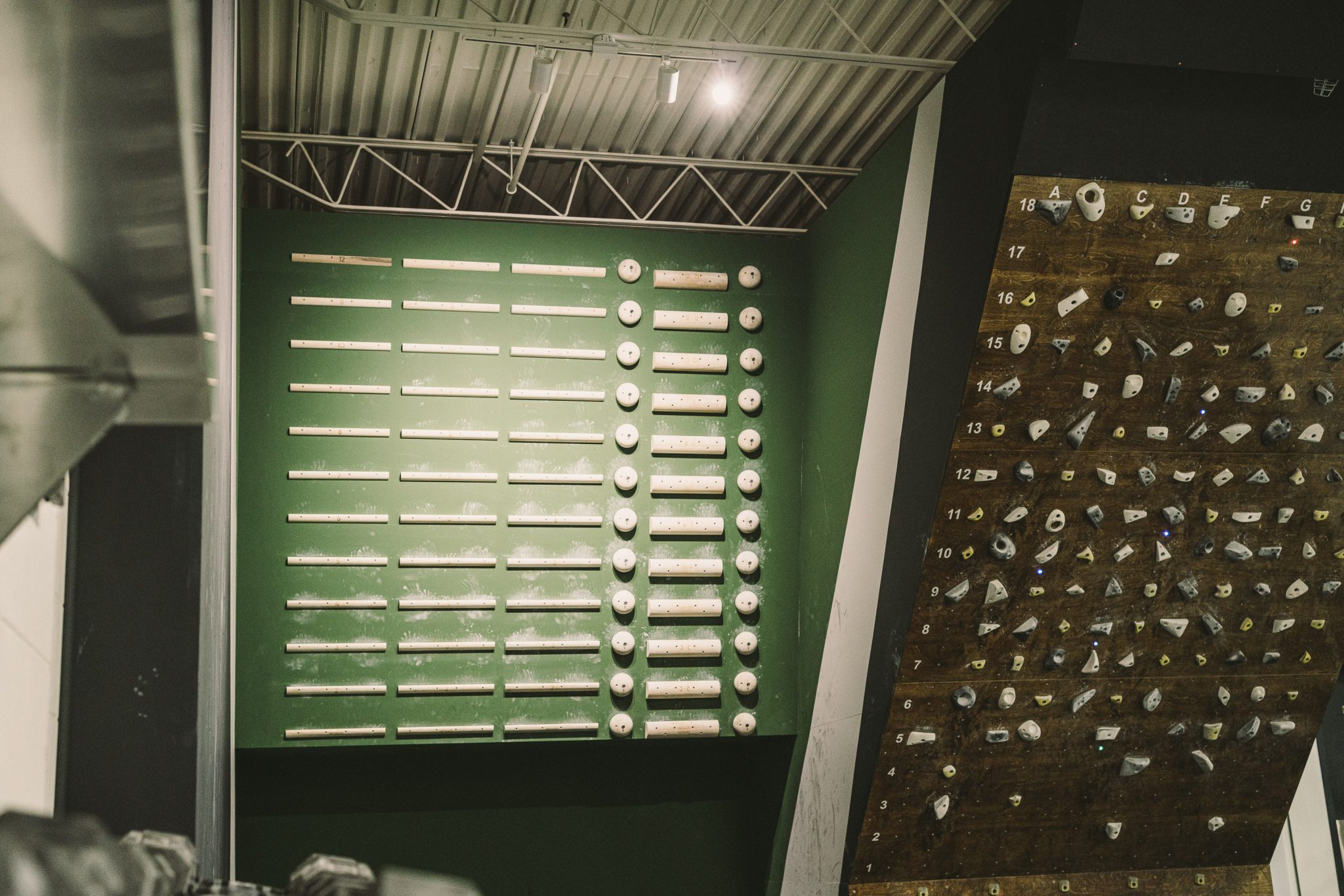 The new Waterloo location is a completely bouldering-only gym with a large number of walls and routes that change weekly. They also have a cafe serving Smile Tiger coffee, smoothies and snacks with plans to include co-workings desks to hang out at and work or study from.

“Come and try it. All our staff is really approachable about anything and dying to help people out. It’s a very social community and a great way to meet people. Lots of people come by themselves and get to talking about a climbing problem and they make friends,” Leroux said.

They’ll be holding the yearly national bouldering competition Tour De Bloc on Feb.22, which is open to the public to compete at all levels or to just spectate.