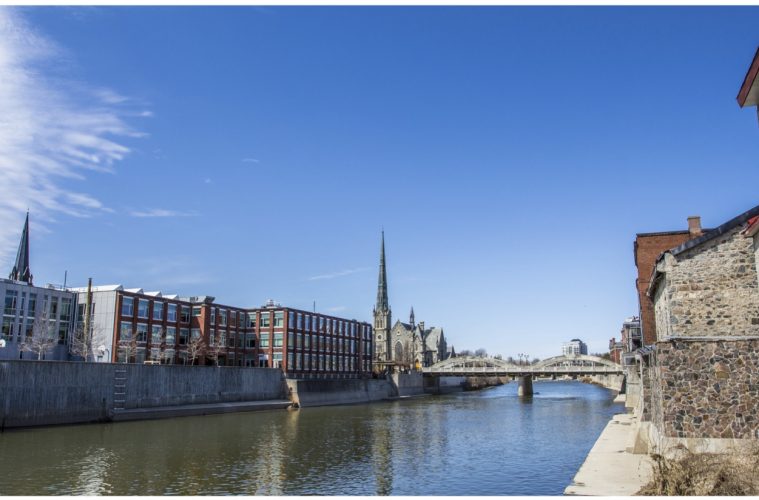 Getting lost in Cambridge

While we’ve been debating urban intensification in Waterloo and counting the amount of coffee shops opening in Kitchener, to the south, there’s a whole city that’s quietly been revitalizing itself.

Welcome to Cambridge — possibly one of the coolest places in Waterloo Region.
The first thing to know about Cambridge is that it is a little different than your average city. It has three entirely different downtown core areas — Galt, Hespeler and Preston. It didn’t even exist before 1973 when “Cambridge” was proposed as a new name for the amalgamation of multiple different villages and communities. However, locals still prefer to refer to the town they were raised in rather than the amalgamated name.

Each core area is being revitalized by the City of Cambridge in an effort to preserve their history, architecture and identity. The project is large and multifaceted, involving parking lot renovations, cenotaph restoration, new signage for businesses and general sidewalk beautification like street lighting, benches, trees and planters.

Karen Grant, Director of the Hespeler Village BIA, explained that the core areas originally sprung up when people lived within walking distance of their employment. In Cambridge’s case, the core areas grew up around mills and foundries.

But with the trend towards shopping malls in the 80s and 90s, and now big-box stores, many urban core areas fell out of fashion. They suffered both physical decay, and sometimes full on destruction, as well as earning a bad image as areas of poverty and danger.

The Cambridge Core Revitalization Project is aiming to improve both the physical appearance and a revitalization of the sense of community. Grant says she thinks the Cambridge core areas are still recovering, but have come a long way since she signed on with the Hespeler BIA about 13 years ago.

There is no time-frame on the revitalization of Cambridge — it is considered an on-going project. Quite possibly the biggest players in the project are the small business owners themselves, especially those that also call Cambridge home.
Associations like the BIAs encourage these core area property owners to engage in upgrades and improvements to storefronts by providing incentives to help cover the costs of storefront renovations.

The BIA also helps to promote events or festivals in the core areas to bring foot traffic back to these areas.

The result is that there is renewed sense of urban pride in the trio of downtown cores. In addition to an influx of great stores, restaurants and watering holes, new businesses and the relocation of University of Waterloo’s architecture to Galt have attracted new residents and shoppers to areas that were once left for dead.

So head down to Cambridge to enjoy the sights, before the rest of the cool kids follow.