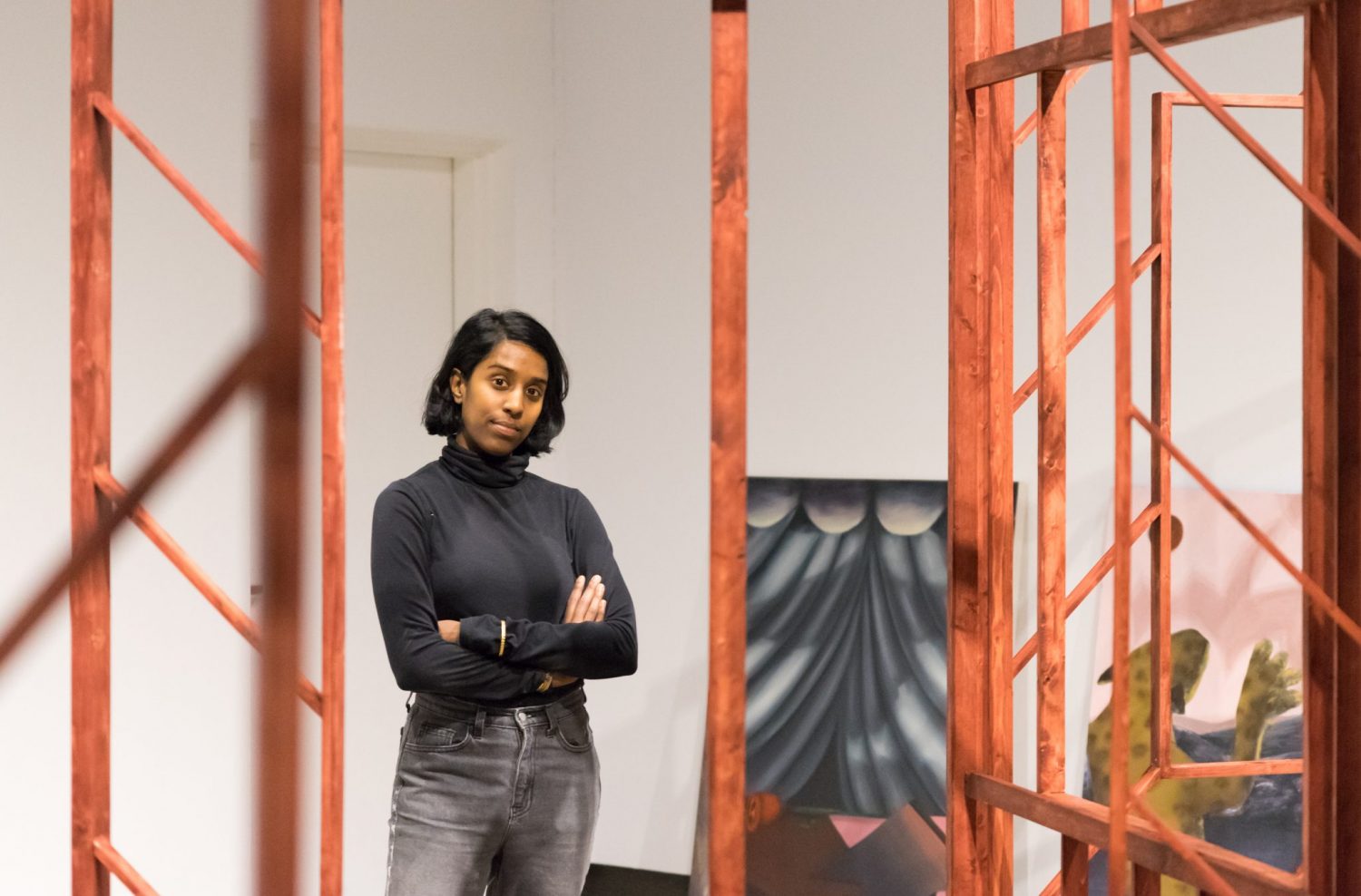 This spring, the Kitchener-Waterloo Art Gallery (KWAG) brings the Waterloo-born, Brooklyn based visual artist geetha thurairajah (intentionally lowercased) back to her hometown.

The exhibition, entitled “Migration is more momentous than ancient invasions,” is an untangling of difference, through symbol and story, in an ever-changing and twisted history. Her paintings cultivate strong, absorbing narratives and evoke rich, human feelings that engage the viewer on multiple levels. Visual cues are subtle and complex while simultaneously tangible and approachable. The show opened on March 29 and will go through June 16.

thurairajah’s artistic practice includes working with digital sketches, airbrush and paint. In 2010, she received a Bachelor of Arts from Wilfrid Laurier University and in 2014, a Bachelor of Fine Arts from the Nova Scotia College of Art and Design. She has been a finalist in the RBC Canadian Painting Competition twice, with an honourable mention in 2018. Her works have been shown world-wide.

“Migration is more momentous than ancient invasions” has a true sense of homecoming. Through a residency at KWAG, it also has an aspect of community engagement, something thurairajah appreciates.

“It feels pretty serendipitous,” she said. “It’s a full-circle thing. It feels nice, because part of this show is a lot of community programming as well. I’m doing workshops with youth from the “Let’s Talk” group with the Multicultural Centre and those have been going on for the past few weeks. To be able to give back, while also being able to develop a pretty involved show makes me feel really good about doing it in my home own.”

thurairajah’s process doesn’t shy away from digital technology — quite the opposite. She sees her art as responding to it in kind. She’s also bringing this focus to her workshops. 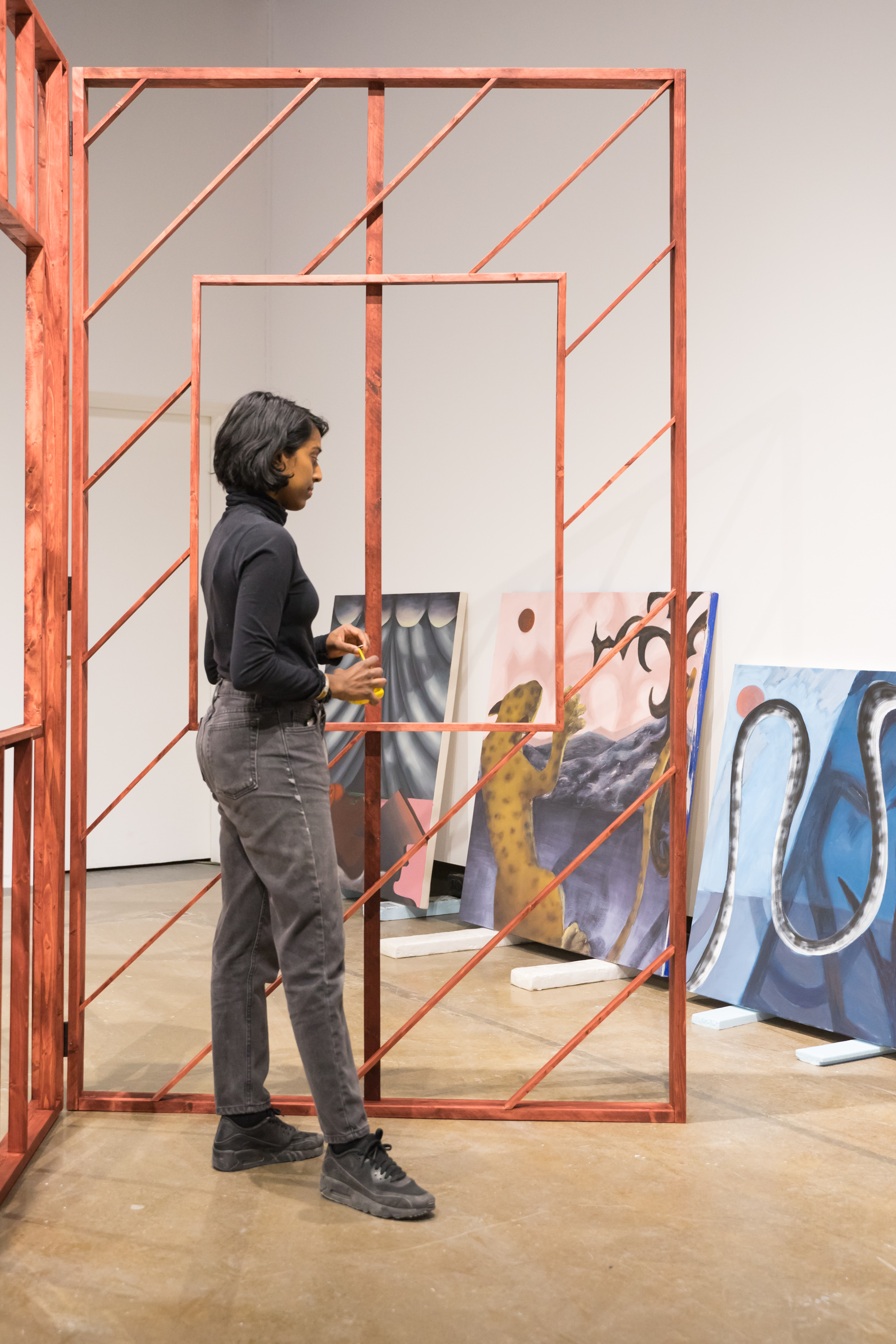 “We’ve already met twice and I’ve been teaching them my process, which has been digital painting. My process with my work is making these digital drawings that I then translate into physical paintings [with the kids,] a process of digitally drawing out their works using Adobe sketch. [Then] we’re going to start painting them [physically— in the studios at the gallery] so that’s pretty exciting for them.”

During her time away from Waterloo, thurairajah has observed some big changes to the city.

“It is so different,” she said, diagnosing her Laurier graduation as the first time she could really feel the city change. “As soon as I left, there was the tech explosion. Coming back now, I feel like I’m coming back to a fairly engaged city … which is cool.”

And of all the places her work has taken her, Brooklyn seems to hold the most magic. Artistically inspiring, with a large community of diverse artists working across many mediums, New York seems like a wonderful place to be working.

“I think it’s been the healthiest thing I’ve ever done for my artwork. I love it.”

However, a true homecoming summons up many of the challenges of growing up in a place from which one has moved away. thurairajah, though, seems to embrace these complexities.

“Naturally, I’m a rule-breaker. I’m sure that if I see any teachers [laughs] … I mean, this has been a real homecoming because I really didn’t love school. I’m just naturally drawn to looking for strategies to explicate difference through painting.”

Overall, coming home feels good. thurairajah’s family lives in KW and are thrilled about the show — above all, to have her around.

“My parents are still in Waterloo. I’m here for a month! They are definitely pretty excited about it.”