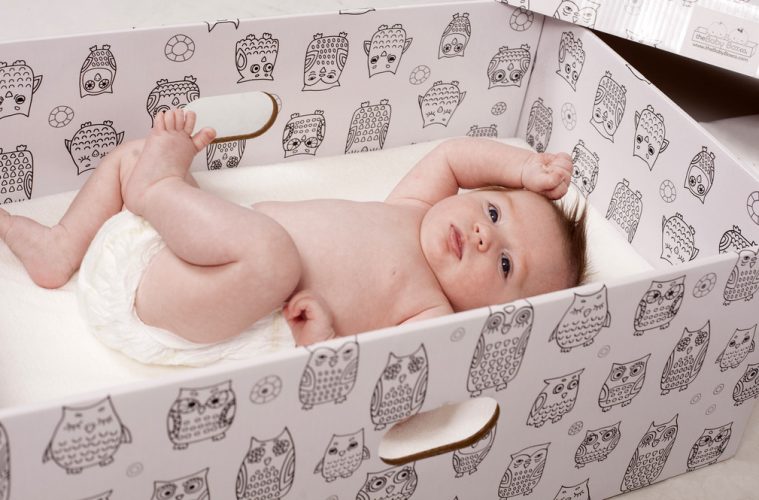 THE VIEW FROM UPSTREAM: WHY CANADIAN BABIES DON’T SLEEP IN BOXES

This article was adapted on Wednesday, February 4 at 3:40pm to better reflect an accreditation to Toba Bryant.

In 1938, the Finnish government started sending “maternity packages” to low-income expectant mothers. In 1949, the packages became universal. The package contains all kinds of items a child will need in their first year: clothes, outer-wear, a sleeping bag, wash products, a toothbrush, even a picture book. Also included is a small mattress, turning the box into the first bed for the baby. The contents are updated each year, not only to keep up with changing styles, but also with changing research and attitudes. A bottle used to be included, but was removed to encourage breastfeeding. Disposable diapers have given way to cloth diapers, for environmental reasons.

The program isn’t only material — it has become part of Finnish culture, a symbol for investing in children.

“The package includes a book for the child, which is good for child development. Giving the fi rst book to a child is to encourage the parents to read to their kids,” says Reija Klemetti, Senior Researcher at The National Institute for Health and Welfare in Finland, a country often topping world rankings for education.

“For decades, Finnish pregnant women have known that if they seek antenatal care early enough they will receive the grant – and use of antenatal care increased clearly after making the grant universal,” says Klemetti. “My guess is that if the program ended, we would miss some early antenatal check-ups – maybe for those who most need it.”

With their investment in children, Finland’s infant mortality rate is 4% what it was in the 1930s, and nearly half Canada’s. It’s no wonder Finland is ranked as the best place in the world to be a mother. Canada is ranked eighteenth.

“Even though Finland is not a poor country anymore, I still think that the program is important,” said Kaisla Seppälä, a mother from Tampere, Finland, who received the package last year before her son Miiko was born.

“It is also a good way to make sure that every baby gets basic toiletries and some clean clothes.”

Mika Gissler, a researcher with the National Institute for Health and Welfare, doesn’t see the program ending soon. “It would be political suicide to suggest stopping the maternity packages. People know it, accept it, and 95% of first time mothers choose to get their own package.”

Information of this widely-praised program is available in a globalized world, but Canadian babies are not sleeping in boxes like their Finnish counterparts. Other jurisdictions’ best social and health policy ideas are not being implemented at home.

The rising costs of healthcare, particularly with aging baby boomers, will put tremendous strain on all other areas of the budget, and potentially bankrupt our health care system altogether – or so the conventional wisdom goes.

“In Canada there is little attention being paid to the social determinants of health,” said Dennis Raphael, Professor of Health Policy and Management at York University and Toba Bryant, assistant professor of Health Sciences at the University of Ontario Institute of Technology. “There is little media attention to these kinds of studies, and major disease associations refuse to acknowledge the social determinants’ implications for preventing life-threatening diseases such as heart disease, diabetes, and cancer.”

Raphael and Bryant see a reluctance in Canadian politicians to grasp the connection between living conditions and health. “Instead, we are distracted by a health care, a reactive approach to illness that precludes consideration of broader determinants shaping the unequal distribution of premature death.”

Today we know that social and financial inequities — particularly the experience of poverty — has a greater impact on our health than our healthcare system, genetics, even lifestyle choices. For a society facing spiking healthcare costs, the social determinants of health (things like housing, food security, social inclusion, early childhood development, employment, and working conditions) arguably present the greatest public policy opportunity since the creation of our social safety net, after the Second World War. While Canada is at the forefront of research in the social determinants of health, we are laggards in turning this research into healthy public policy — while Finnish babies benefit from sleeping in their care-filled boxes, Canadian children rest outside the box.

If the social determinants of health hold such promise, what are we doing locally, provincially, and nationally to apply these ideas? How do we rewrite conventional wisdom so that governments, institutions and communities are using the powerful social determinants framework to encourage longer, healthier, happier lives?

The Community Edition is launching a series called “The View From Upstream,” to address some of these questions. Follow along as we explore upstream solutions to some of our biggest challenges.

Cameron Dearlove is a community developer and advocate for healthy public policy in Waterloo Region. Questions and ideas can be sent to cameron@thedearlove.com.