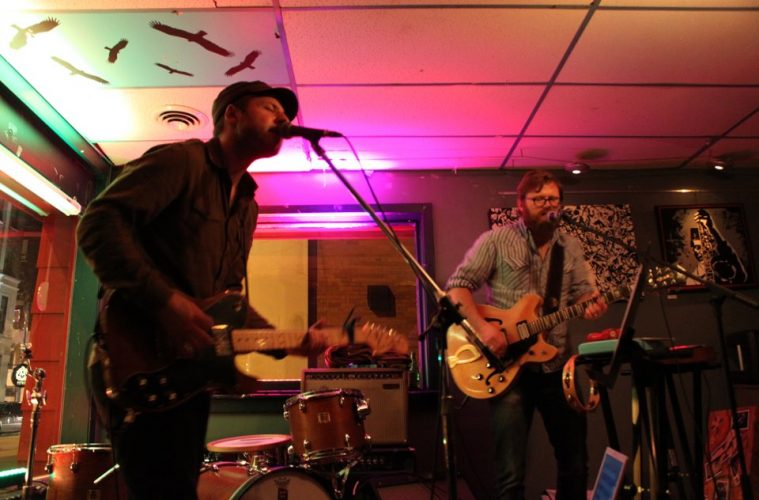 Rob Mcfee & Duncan Nicholls play their first show as Other Islands at Phog Lounge in Windsor, On Mar. 9 • STEPHEN HARGREAVES The Lance

Born of the ashes of long-running and much acclaimed Kitchener band Vacuity, Outer Islands is the
new solo project of guitarist/vocalist Rob McFee. The live incarnation of the indie- guitar-pop meets electro project includes the capable hands of K-W comrade, multi-instrumentalist Duncan Nicholls, who collectively introduced a string of highly-crafted songs to the world last Saturday at Phog Lounge, in Windsor, Ont. in Outer Islands’ first performance outside of Mcfee’s basement studio.

Stephen Hargreaves: Rob, you were in quite a successful band that has played in this very venue in the past?

Rob Mcfee: I was in Vacuity but we parted ways.

SH: Why did Vacuity separate?

RM: We were in a band together for 15 years, like from high school. We put out an album, we played a pretty successful tour in summer in support of the album and after that it was like what is next.

SH: Were you looking for something more?

RM: I don’t know. When you are in a group with people for a long time, sometimes things are super positive and others, not and for the last couple of years and we worked really hard and then it was like “what’s next?” I had a bunch of songs and I invited Duncan over to work on something with me on what has become Outer Islands.

SH: So when did you guys get going then?

Duncan Nicholls: About one month ago.

SH: Have you played yet?

DN: March 23 is our first hometown gig; this is our maiden voyage tonight.

SH: I heard some backing tracks, some loops and synths mixed in with the guitars at sound check. What is your sound like?

RM: We sound kinda like Pixies or Ra- diohead but we don’t. I think we are going for pop that is like not too smooth.

SH: What do you think about the scene in Kitchener-Waterloo?

RM: There are some pretty great bands in Kitchener. It’s like a mixed bag. I am really into a band called Sex Dwarf. Their band name and song names are silly, but they write great songs.

RM: We are doing three shows. We have a show tonight at Phog and the Boathouse at Kitchener. We plan to try and book [a tour] for June but we haven’t talked about it yet but we will figure it out.

SH: Have you guys recorded anything yet?

DN: We have a whole stack of demos. When I showed up a month ago Rob was like, “here are a bunch of songs.”

RM: One song, Balloon Capsule, is out now on our website already.

SH: Is there any reason why you decided to come down to Windsor for your first show?

RM: Phog is very exciting. I was trying to book some stuff out of town. I had a couple of other gigs but they were at bigger places and I ended up calling some of those off. We know James O-L and the Villains and they are playing with us at the Boathouse in Kitchener, so did the show swap thing; they always bring in a lot of people here and it’s always a good time.

SH: For people who are coming to see you on 23rd in Kitchener-Waterloo at the Boathouse, what can they expect to hear?

RM: It is going to be all new songs as opposed to Vacuity stuff.