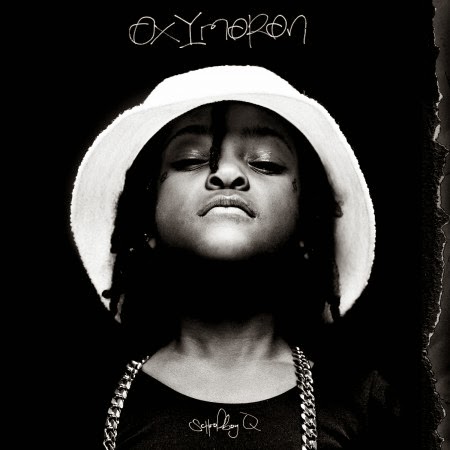 2013 launched a plethora of quality hip-hop albums into the mainstream. Fans grabbed LPs from rappers like A$AP Rocky, Kanye West, Drake and the almighty Jay-Z. However, missing from 2013’s list of acclaimed records was one by LA rapper ScHoolboy Q.

Often referred to as ‘Q,’ in the hip-hop community, this South Central emcee got some well-deserved shine for his 2012 mixtape entitled Habits & Contradictions, which propelled him into hip-hop stardom. Immediately after its release and commercial success, fans and critics alike were excitedly anticipating his debut LP. However, due to pushback after pushback, his debut studio LP entitled Oxymoron didn’t drop until February 25, 2014.

Oxymoron employs a mix of dark, introspective rhymes with some youthful ignorance, laid over flawless production. As a bar-for-bar emcee, ScHoolboy Q has no problem flexing his lyrical abilities with rapid fire delivery as heard on tracks like “Collard Greens” with label-mate Kendrick Lamar and struggle ballad “Blind Threats” assisted by Wu-Tang Clan member Raekwon. In addition, ScHoolboy’s anthem-making capabilities are nothing to scoff at. Songs like “What They Want” and lead single “Man of the Year” provide the perfect turn up tunes for any party.

Although the album has many stellar moments, it has some hiccups. Certain songs on the 12-song track list seem lost, as they don’t fit into the album’s clear theme of dualities within street life. Nevertheless, Oxymoron meets the challenging task of appealing to casual fans without straying too far from the formula that attracted ScHoolboy Q’s core audience in the first place.