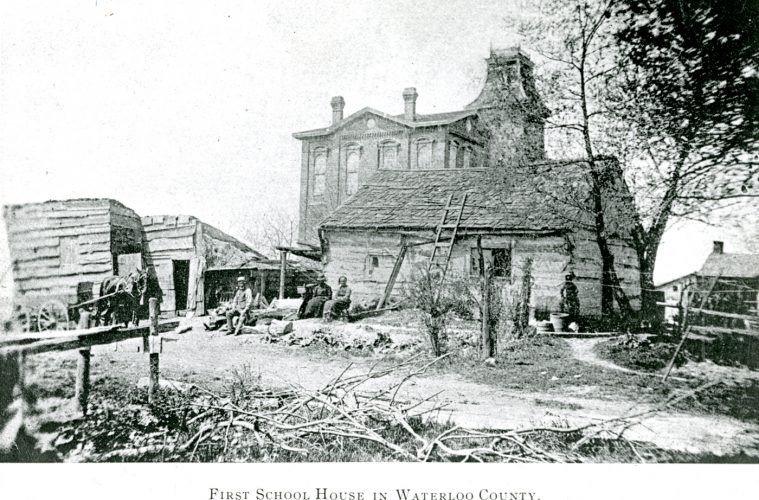 Levi Carroll was born in Maryland, and lived through the War of 1812 before throwing off slavery and fleeing to Canada. He had a peg leg, so by modern standards was disabled. He outlived three wives and (probably) two sons. At the time of Confederation he was already an old man, but lived for another 30 years before he died in the Berlin House of Industry and Refuge in his mid-90s.

While researching the old wooden schoolhouse that now sits in Waterloo Park, Joanna Rickert-Hall, local historian and educator, came across this man named Levi Carroll, who lived in the schoolhouse after it went out of use.

“Levi Carroll is actually the reason I started researching this stuff. He’s the one who really captured my attention,” she said. It’s understandable, he’s quite the character.

“Here’s the best part,” Rickert-Hall continued with excitement. “Carroll’s obituary was posted twice within a couple of days, and one of the lines in one of the obituaries was ‘a citizen whom almost everyone knows.’”

And yet when Rickert-Hall began doing her research she read an article written for Black History Month that called Levi Carroll an icon of black history in Waterloo, but also said that we don’t know that much about him.

“That’s really sad… that this guy’s an icon but gets pulled out of obscurity, and basically gets showcased every February as an important story, and yet there’s always very few details about him.”

It is easy to tokenise a character like Carroll, to pay our regards every February and then refocus on the local historical bigwigs, the Abraham Erbs and Bishop Benjamin Ebys.

But that is an injustice to Carroll’s memory and to our own history. Carroll and his family occupied a key piece of our built heritage in Waterloo Region, and yet his story is not mentioned on the historical plaque there.

There is a photograph of Carroll and his family in front of the schoolhouse, taken while he was living there. Rickert-Hall has spent a lot of time examining that picture, and for her it shows Carroll’s humanity. In the picture he is seated, one hand on his wooden leg, his family around him. The crooked roof shingles are probably left over from his day job as a shingle maker. It is not hard to imagine him climbing the ladder with his peg leg at the end of the day to fix up the roof.

The story of Carroll is part of the larger story of Waterloo Region and the arrival of ex-slaves into the community. In the realm of black history there are some undeniably horrific events, but as Rickert-Hall sees it, the story of Black History Month in Kitchener-Waterloo is also one of hope.

“There are many examples,” said Rickert-Hall. “One couple came to the area, and mennonites gave them seed and tools so they could plant a crop to get started.”

In her research Rickert-Hall has found that the mennonites in our area provided a great deal of hope, support and work for the incoming black community that, unlike their mennonite neighbours, did not arrive in Canada whole and healthy. Families had been pulled apart and the landscape and climate were unfamiliar. Many had endured lasting horrors.

A story about people who arrived with very little and joined a community that supported them. A story about people like Carroll who struggled, who worked multiple jobs, and who at one point rented out part of the tiny schoolhouse he himself rented—but who were welcomed to Canada. It’s important to remember that the black members of Waterloo were not separate; they were contributing to the local economy, and to the community.

When Rickert-Hall looks at the picture of Carroll in front of his house she does not simply see an icon of Black History Month who we know little about, but a fellow resident of Waterloo.

“He was a person, he had to survive. He’s going to be resourceful. He’s an ex-slave.” Rickert-Hall continued, this time about the Carroll family, the admiration clear in her voice, “I bet they were proud.”