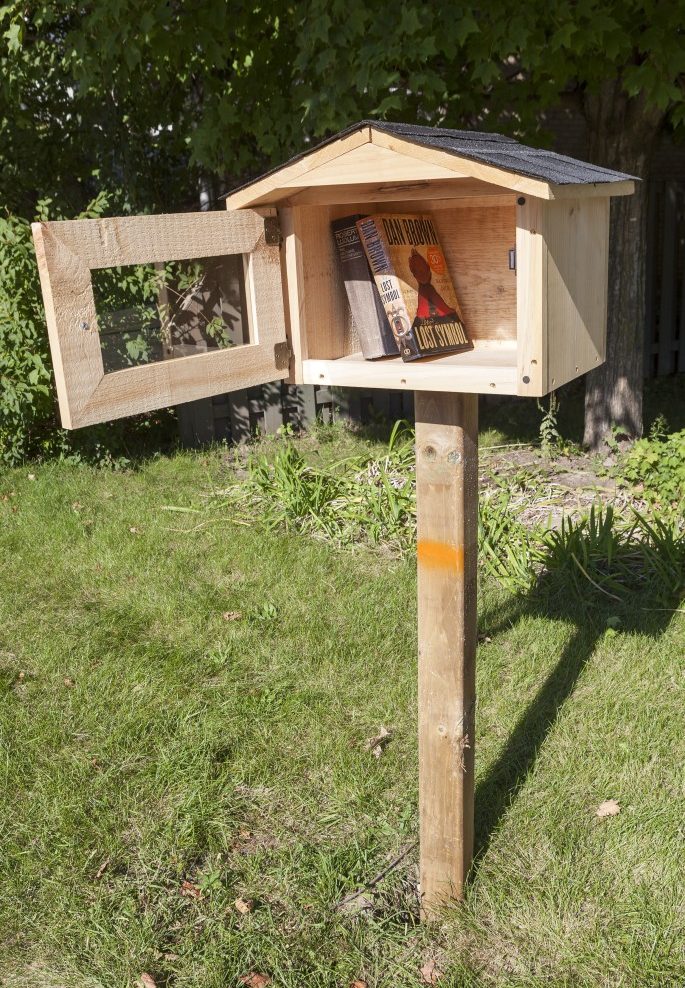 A tiny tour of little libraries

Anyone can build a little library, but a local group, Little Libraries of Kitchener-Waterloo, began hosting community builds in 2013 with the purpose of making building and maintaining little libraries as easy as possible for community members. In 2015 the first two LLKW community builds sold out weeks in advance and more builds are expected.

LLKW organizer Tom Nagy described the community response as “Fantastic. Everybody has been really positive.”

Other communities have experienced backlash from city councils about the legality of little libraries, but Nagy described our local governments as being incredibly supportive, “people just get it here.”

Our communities’ interest and passion for literacy and engagement is obvious when you realize how many little libraries are throughout the region. Travelling east to west through KW, I visited seven little libraries, along a 5 km route.

Starting in Breithaupt Park, on a beautiful forested trail to the right of the splash pad and playground, I visited the first of seven little libraries. Well suited for the family neighbourhood, there was a good mix junior fiction in this library including a copy of “Harry Potter and the Philosopher’s Stone.”

My next two stops were across the street from one another on Waterloo St. Situated between the community garden at Uniroyal Goodrich Park and Mount Hope Cemetery, these two little libraries will have something for everyone in the neighbourhood. The little library on the east side of the street caters to the younger crowd with many junior fiction books and picture books. Classics and modern favourites like “Nancy Drew,” “The Babysitter’s Club,” and “Pete the Cat” were found in this little library.

On the west side of the street I found many adult fiction titles, including “Hell Going,” a collection of short stories by Canadian author Lynn Coady. “Hell Going” won the 2013 Giller Prize, Canada’s largest book prize.

Continuing up Waterloo St. to Moore Ave. South I came across another little library where I found the non-fiction best-seller, “Into Thin Air” by Jon Krakauer.

Heading up to Allen St. East, I came across a lovely little library at Mary Allen Park recently installed by the Mary Allen Neighbourhood Association. Young adult titles, cookbooks, and literary fiction filled this little library. I found another Canadian literary novel, “Fugitive Pieces” by Anne Michaels here. Once the Spur Line trail is completed, this little library will be a hot spot for active commuters looking for something new to read.

Walking Allen St. into the uptown west neighbourhood I found a bright purple little library on Severn St. A diverse collection, this little library had “Middlesex” by Jeffrey Euginedes, “City of Bones” by Cassandra Clare, fiction best-seller Lisa Scottoline and a mix of biographies. Close to Belmont Village, readers are able to stop by the library on their way to breakfast at Checkerboard Restaurant or dinner at Janet Lynn’s Bistro.

Heading down Union Ave. and turning north on Avondale Ave., the final stop on my little library tour was a beautifully designed library space. This little library comes equipped with a beautiful stone bench and garden space that encourages readers to sit down and stay for a while. “Dreams of Joy” by Lisa See, “Cooking for Dummies” and fantasy titles by Philip Pullman and Terry Brooks rounded out this collection.

We are a community of book lovers. We have fantastic public library systems, independent bookstores and now dozens of little libraries. But little libraries are about more than just books. These little libraries encourage us to walk around our city and engage with our neighbours. They are conversation starters and they bring people together.

I encourage you to explore your neighbourhood and discover a little library near you.